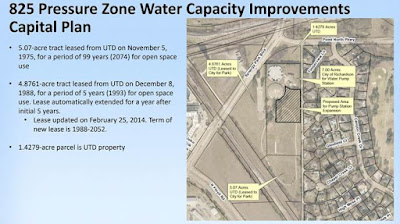 Why is this distinction so important? Well, the City didn't tell residents this, but for one thing, state law prohibits cities, under most scenarios, from taking any public land used as a park and putting it to any other use. Which is exactly what the City of Richardson is in the process of doing at Point North Park, er, Open Space. So it might be to the City's legal advantage to claim this park was never really a park.

The City is backtracking and saying Point North Park is not a "park" in order to use its land for a new 5 million gallon ground storage tank and a 15 MGD pump station. If you own a house in Canyon Creek adjoining the park, tough luck. There's a good chance your view will be affected when that new 24ft-tall pump station fills the open space across the alley from your house. If you are a Richardson resident who utilizes the park for recreation, tough luck. Although the City pledges to move the playground, ballfield, and track, it admits that the total amount of open space will be diminished. They didn't say it, but I will: diminished by a lot. The park wasn't all that big to begin with.

But you know what? You can't fight City Hall. Getting even a "my bad" out of the City is often more than you can get. These words from City Manager Don Magner come as close to that as I can remember hearing.

I'd be remiss if I didn't acknowledge that for a long time this open space has been called a park and I'm not gonna sit here and say that that's not the case. And there are a lot of citizens that believe that it was a park even though it's not dedicated park land and that's a good lesson learned from us. Thirty years or so ago it started to be referred to as a park and I wish I could go back at that time and change that but we are where we are today as a result of that.
...
You know, quite honestly I think in a weird way, it's lucky that it is the city that's next door, not a commercial property. You can just put up a building or an apartment complex, you can just rise a four or five story building next to homes like this.
Source: City Manager Don Magner.

Yeah, "weird." When someone begins a sentence with "You know, quite honestly..." your bullshit detector should be going off. I'm sure residents feel "lucky." Lessons learned? When you buy a house, you know what you might get if a nearby privately-owned property is zoned commercial. But if it's owned by the City, all bets are off. You can't trust those City maps or marketing materials that brag about all of the beautiful park land in the City. When you buy a house in Richardson, you'll have to ask the City Manager if the nearby neighborhood park is even really a park. Don't trust the maps. The City can change its mind forty years later, with little recourse to you, the homeowner.

Update: A helpful reader points out that calling Point North an "open space" instead of a "park" hardly gets the City off the hook. According to the City's "Parks, Recreation and Open Space Master Plan":

I don't see how building a 5 million gallon ground storage tank and a 15 MGD pump station is at all compatible with City's own goal for Point North as either a park or an "open space."