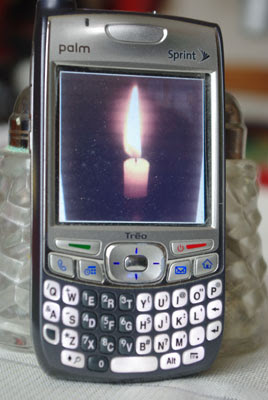 Ellen and I celebrated our 25th wedding anniversary with a quiet dinner for two at a local fancy restaurant, the Silver Fox Steakhouse. You know the type: "an atmosphere of intimate dining surrounded by mahogany and marble, which sets the tone for an exquisite experience." 8 oz. petite filets, $36.95. With Bearnaise Sauce, add $3.95. The proprietor came to our table and introduced himself and gave us his business card.

Everything was perfect, except for the lack of a candle on our table. Not to worry. After a quick Google image search on my Internet-enabled smart phone, voila, the romantic anniversary dinner was complete. Ellen and I plan a Caribbean cruise in a few weeks for a second celebration. It had better have everything. I won't have cell phone service at sea.

The Academy Awards presentation is now behind us. As usual, I've yet to see any of the movies nominated for best picture and only one of the acting performances. I'm a Netflix movie-goer, so I'll be seeing the nominees as they slowly come out on DVD. Expect to read my own take on Oscar's choices then.

I did see The Dark Knight, as it was released last summer. I even saw it in a movie theater. My opinion?

Ledger was dead and gone by the time this movie even hit the theaters. He probably had the Oscar sewn up before the first weekend's gross was even totaled up. But this award is not simply a sympathy vote. Without Heath Ledger's Joker, The Dark Knight would be wholly forgettable. Oscar will never look back and regret not giving the award to <fill in the blank>.

Early Spring In The Steger Garden (2009)

The mums are green but still hugging the ground. The Wandering Jew is only showing it's still alive. The Yellow Lady Banks Rose is dormant. The Bradford Pear is starting to bud but showing no flowers or leaves yet. No sign of life yet on the crape myrtles. Only the weeds in the St. Augustine grass in the front yard are thriving. They are starting to scream for attention. And the daffodils are in full bloom. Yes, it's early Spring in North Texas.

Email ThisBlogThis!Share to TwitterShare to FacebookShare to Pinterest
Labels: Family
Newer Posts Older Posts Home
Subscribe to: Posts (Atom)
Title credit: "The Wheel's Still in Spin"
"Not Being Listened to Since 2006"
Reader Praise for "The Wheel"