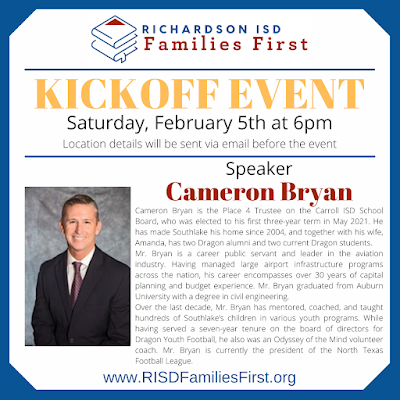 In Richardson ISD's June 18th runoff election for its District 2 seat on the Board of Trustees, I'll be voting for Vanessa Pacheco. I won't be voting for Sherry Clemens because of dealbreakers like this: she is aligned with Southlake's anti-diversity, anti-equity, anti-inclusion advocates in Carroll ISD.

In February, at the "Richardson ISD Families First" PAC's kick-off event, their guest speakers were Cameron Bryan and Andrew Yeager. The names may be unfamiliar to most in Richardson ISD, but they aren't unfamiliar to the PAC's base. They are two recently elected Carroll ISD trustees. WFAA Channel 8 summarizes what happens when such candidates get elected:

A new lawsuit settlement in Carroll ISD has ended efforts on a long-debated diversity and equity plan...The board voted 4-1 with two members abstaining to approve the settlement, disband a diversity council in the district and also reject the [Cultural Competence Action Plan].
Source: WFAA Channel 8.

Carroll ISD's Andrew Yeager was endorsed by Clay Hunt of Southlake, who also donated $5,000 to Sherry Clemens's own RISD campaign. It's reasonable to fear that Sherry Clemens would vote in Richardson ISD like Bryan and Yeager have voted in Southlake. I support Richardson ISD's own "Equity, Diversity, Inclusion Policy", adopted in 2019 by a unanimous 7-0 vote of the school board. That policy was greeted by the audience with a standing ovation. I will not vote for a candidate who does not offer their full support for RISD's policy. I will not vote for anyone who is aligned with those, like Bryan and Yeager, who dismantle similar efforts elsewhere. I don't want Richardson ISD turned into Southlake.

Normalizing kids to the lowest denominator is not success.

I agree. But this blogger won’t. He is hell bent on reasons not to vote for someone, and it is all the familiar political bigotry wrapped up in well abused tropes.

The "straw man" argument remains one of the most beloved rhetorical tactics in politics; for example, exclaiming, 'My opponent supports normalizing kids to the lowest denominator, and this is not a success', when your (perceived) opponent has neither said, nor implied, any such thing.

What Mr. Steger actually has supported in this blog post is the RISD's Equity, Diversity, Inclusion Policy, which is aimed at achieving equality of opportunity, not equality of outcomes. The intent is to allow each student to realize their potential. Is that something we should be opposed to? (Not a rhetorical question, BTW)

As to Mr. Steger's reasons for opposing Ms. Clemens' candidacy for RISD Board, I don't think the term "hell bent" is fair or accurate, inasmuch as this implies a maniacal, irrational, obsessive goal. In fact, he has been careful and measured in listing and explaining the specific reasons why he sees Ms. Clemens as less qualified to hold the position than Ms. Pacheco. If you support Ms. Clemens for "political reasons"--as many people do--do not fall into the trap of assuming that anyone opposing her candidacy is engaged in "political bigotry".

This sort of language is inflammatory and divisive, and I stand against it.