When is a Park Not a Park? 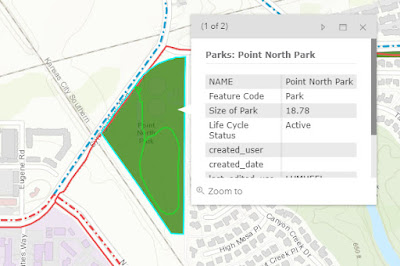 The City of Richardson is beginning a project to build a 5 million gallon ground storage tank. Where? Well, I can tell you nearby streets. I can even tell you approximate GPS coordinates. What I can't tell you is whether or not the tank is going to be in Point North Park. What I can tell you is that a city-owned playground will have to go. So will trees. Maybe they'll be moved. Maybe new trees will be planted. And after all is said and done, some of the land that many visitors to the park always considered to be part of the park will be sacrificed to a water storage tank.

The map above is from the City of Richardson's list of Neighborhood Parks. It shows Point North Park and indicates it's 18.78 acres. But below that, in a list of parks, it specifies a size of 5.49 acres. Which is it? Eighteen acres or five? Dunno.

Turning to the City of Richardson's Zoning Atlas (shown below), we get a clue. 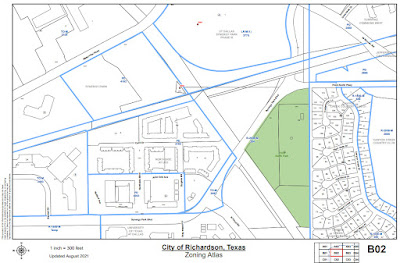 Notice that the zoning atlas shows the park divided into several plats, one of which is a longish north-south oriented rectangle, leaving two triangle-shaped plats on the west and south sides of the park, as well as a smallish plat that caps the park on the north. What's with those? I've been told the park is composed of three separate plats, but is it really four, as suggested in this map? And is it all really part of the park? Again, dunno.

The history of the park is convoluted. It was stitched together from land owned by the City and land leased from UT-Dallas at Richardson. That triangle on the left is land owned by UT-D but leased to Richardson. The original lease seems to date to 1988, but was renewed in 2011 in an agreement with UT-D for the City to pay for infrastructure on campus in exchange for leases to this park land as well as nearby land for construction of a water tower. And still another plot of land along Floyd Rd that is currently undeveloped (you can see that in the bottom center of the Google aerial photo below). 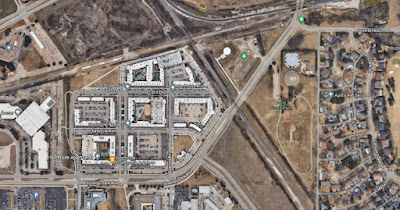 Why is this of interest now? It's because of that project to build a 5 million gallon ground storage tank on Point North Park land. Or not on park land, as the City is now trying to tell residents. The City now says that the land the water tanks are on, that big rectangle in the zoning atlas, was never park land in the first place. It was always intended for future expansion of the space used for water tanks. But if that's true, why was the playground and part of the baseball field built on that land? Again, dunno. In any case, the recreational features are where the new water tank is planned. Maybe the City just plans to move the recreation uses to the southern tip of what remains of Point North Park (or more precisely, what everyone thought was all Point North Park). As far as I can find, the City has made no commitment to what Point North Park will look like after the construction of that 5 million gallon water tank. Instead, the message seems to be "Wait and see."

The City seems to have mismanaged communication about this park for years. Maybe someone in the City knew all along what was in store, but if so, it wasn't communicated to the various map makers, and certainly not to the park's neighbors and the rest of the residents of Richardson. Are there any other parks that aren't really parks that Richardson residents should know about? Last time, dunno.