In Richardson ISD's June 18th runoff election for its District 2 seat on the Board of Trustees, I'll be voting for Vanessa Pacheco. I won't be voting for Sherry Clemens because of dealbreakers like this: she is aligned with the anti-masker candidate for Dallas County Judge, Lauren Davis.

According to The Dallas Morning News, Lauren Davis "has said Dallas ISD's mask policy created a hostile learning environment for her children. Beyond that, it is unclear what she hopes to accomplish if elected. Her campaign website offers no specific proposals. She did not interview with the editorial board or respond to our Voter Guide questions."

Do you know what group she did meet with? In February, at the "Richardson ISD Families First" PAC's kick-off event, one of the guest speakers was Lauren Davis. Let's leave aside my dislike of mixing party politics (the Dallas County Judge election is partisan, meaning there'll be "R" and "D" after the candidates's names on the ballot) with nonpartisan school board elections (no "R" or "D" on the ballots for school board). That's only a minor stumbling block, not a dealbreaker, compared to Lauren Davis and Sherry Clemens both opposing masking requirements in the face of a deadly pandemic. Simply put, their politics pose a risk to public health. Lauren Davis and Sherry Clemens love freedom. It says so right in Lauren Davis's Twitter handle, @MomsLoveFreedom. I do, too. I also love keeping kids, their teachers, parents and grandparents alive and healthy. 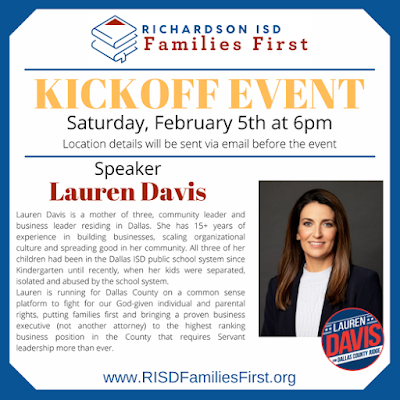 Maybe you should read her bio on a child with asthma and how forced useless masks made it worse. I will be voting for Sherry.

This is just getting desperate. It’s almost like you have a crush on Clemens.

I have two children with asthma, and both did just fine wearing masks, even during indoor sports when the pandemic was bad. Asking for an individual exemption is fine. Allowing a free-for-all during a dangerous pandemic is not.

Because your asthmatic kids didn’t have an issue then all asthmatic kids shouldn’t?
How many exemptions did the district approve? I know of serval with doctor notes that were denied. Covid was a non issue for young kids. Masks did not do much, data is slowing showing that true.

Lots of reasons he gives to be against a candidate, not much reasoning to be for a candidate. We know what happened the last time we did that. We now have Biden, how is that working out?!

Mark must be hitting a nerve, based on these weak comment “rebuttals”