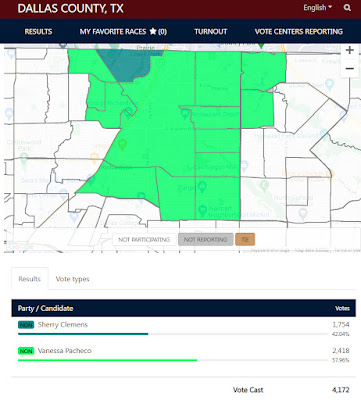 There were actually slightly more voters in the runoff than in the May 7 Joint Election. Interest was high in this runoff.

Vanessa Pacheco won 58-42%, a commanding win, if perhaps not quite a landslide. She won every precinct in District 2, except one: Prairie Creek. But even in Prairie Creek, Sherry Clemens's total dropped from 61% in the three-way May 7 Joint Election to 57% in the two-way runoff. Pacheco was gaining ground, in a big way, everywhere.

Why did Pacheco win? Everyone has an opinion, but I attribute her victory to three things:

Money doesn't always determine results. Sherry Clemens raised $55,165 for her campaign. For 1,754 votes. That's $31.45 per vote. On top of that, she was supported by the Richardson ISD Families First PAC, which Transparency USA reported spending $54,825 this election cycle, split between Clemens and Jan Stell in District 5. All of this in two losing efforts. Money isn't everything.

Pacheco, on the other hand, raised $7,597 for the May 7 Joint Election, then picked up the pace for the runoff, raising an additional $15,377. Clemens still outraised Pacheco in the runoff, $22,939 to $15,377. And still lost. The days of inexpensive local school board elections may be over.

The days of local school board elections remaining "local" may also be over. After a string of victories across the state in the May 7 Joint Election, the Texas Tribune reported this:

“Republicans dominated school board races across Texas because parents are fed up with left-wing garbage,” Texas GOP chair Matt Rinaldi, said in a statement. “The Republican Party of Texas will continue to support education over indoctrination and plans to expand our efforts in local and nonpartisan races.”
Source: The Texas Tribune.

But, at least for now, at least for one more election cycle, RISD voters resisted the tide of outside influence and far-right PAC money. Don't get complacent. They'll be baaaaack!

In the Dallas College District 1 runoff, Dr. Catalina E. Garcia defeated Lynn Davenport 64-36%. Now that's a landslide. Davenport "improved" from 32% of the vote in the three-way May 7 Joint Election to 36% in a two-way runoff. She, too, has her base, but apparently no appeal beyond it. In RISD District 2, only Prairie Creek gave her a majority. The story was similar everywhere.

This is perhaps the most disheartening yet true statement of this blog: “The days of local school board elections remaining "local" may also be over.” Hopefully, the newly elected board trustees can figure out how to build consensus and be a voice of reason for all, which is becoming more difficult by the day given the vitriol at recent board meetings and events.

It will only get worse:
https://www.cnet.com/news/politics/features/school-boards-are-becoming-the-fiercest-battlefront-for-the-culture-wars/