Dealbreaker #6: She Lies about CRT 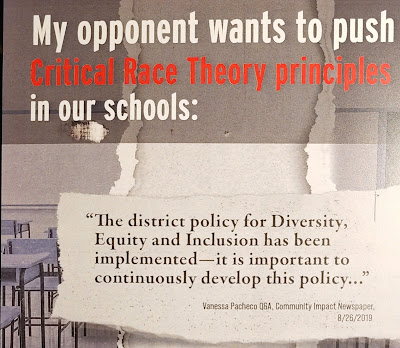 In Richardson ISD's June 18th runoff election for its District 2 seat on the Board of Trustees, I'll be voting for Vanessa Pacheco. I won't be voting for Sherry Clemens because of dealbreakers like this: she lies about CRT.

In a recent mailer, Sherry Clemens claims that her opponent "wants to push Critical Race Theory principles in our schools." This is a lie. I don't know how else to say it. Clemens is no longer trying to hide her extremism behind moderate slogans like "An Excellent Education = A Brighter Future" that fill the many other mailers that her $30,000+ campaign chest is paying for. She has turned to explicit lies.

Let's look at the claim in more detail. For one thing, CRT was never taught in RISD in the first place. And now it would be illegal if RISD did teach it. Sherry Clemens is appealing to the prejudices and passions of voters through false claims and crude oratory. If that sounds like a dictionary definition of a word, that's because it is: demagogue.

To repeat, Texas passed two bills in 2021 prohibiting CRT. The first, HB 3979, "is commonly called Texas's 'critical race theory law,' after the academic field which became a popular target of criticism by conservative pundits." That law apparently was too vague, so the legislature passed an even more restrictive law, SB 3. "This act essentially bans teaching CRT in Texas schools." So there. There's simply no chance of CRT being taught in schools. But Clemens would not only like you to think there is, she wants you to think that Vanessa Pacheco is "pushing" it.

In fact, the quote Clemens uses in her attack ad is from an interview from 2019. Almost three years ago. Nine months before George Floyd was murdered. Nine months before the first BLM march. Even more months before "CRT" became an evil-sounding but meaningless attack slogan in Republican Party politics. Clearly, the newspaper wasn't asking Vanessa Pacheco about CRT in that interview as Clemens wants you to believe. The fact that Clemens couldn't find anything more recent, anything at all from this year's campaign, is telling. She's reaching into the bottom of the barrel to find something, anything, to attack her opponent. Finding nothing, she lies.

The purpose of this policy is to establish a framework to eliminate any bias, prejudice, or unlawful discrimination that may affect student achievement and learning experiences and to promote learning and working environments that welcome, respect, and value equity, diversity, and inclusion.
Source: RISD.

Clemens knows she can't argue openly against diversity, equity, and inclusion, so instead she argues against a straw man, a three-letter acronym called CRT. And that's why I won't be voting for Sherry Clemens. Because I support diversity. I support equity. I support inclusion. What I don't support is a candidate who uses lies in attack ads. I'll be voting for Vanessa Pacheco. She has a lot of positives in her favor, not least of which is the positive campaign she has run, and none of Sherry Clemens's dealbreakers.

In case you think there's any chance that my charge that Sherry Clemens lies about CRT is too strong, in a Facebook post, former RISD trustee Lanet Greenhaw said that in a personal conversation, Clemens "admitted to me directly she knows CRT is not being taught in RISD. She also claimed she had nothing to do with the CRT mailer used during the General Election and, when asked, committed she would not distribute any CRT mailers during the Run-Off. Promise broken!!" Greenhaw's accusation was confirmed by former RISD trustee Karen Clardy, who added, "I had the same conversation with Sherry. Unbelieveable." If you doubted my charge that Clemens lies about CRT, these two reports are damning confirmation that she did just that. Lied.

The ongoing Jan. 6 Committee hearings highlight the dangers we face as a society when lying becomes normalized. It raises questions about what a person may have believed was true? Were they delusional? Misinformed? Intentionally and maliciously deceptive?
Questions such as these will arise repeatedly in the "Post Truth Era", when signaling loyalty to "the team" trumps a commitment to truth, or a broader commitment to the good of society at large. The Post Truth Era is a time when too many people feel no incentive to honor the truth, or to seek honest answers, especially if speaking the truth feels "uncomfortable", or might even lead to being ostracized from one's own "team".
None of these ambiguities of the Post Truth Era excuse RISD candidate Sherry Clemens' making false or deceptive accusations against her opponent in her campaign literature. If she didn't know what was true or false, she ought to have known. Nor is it consistent with Clemens' claims in her campaign material that "every parent deserves transparency..." and "RISD must build trust with parents, teachers, and community".
Trust is important. We need board members who are: a) capable of distinguishing between evidence-based facts and mere opinion, b) committed to honest, factual engagement with the community, c) committed to the goal of overcoming their own cognitive biases and discovering underlying objective reality. I agree that Ms. Clemens inability or unwillingness to do so disqualifies her as a suitable candidate for RISD Board.
Jeffrey Levine, RISD District 2