Dealbreaker #7: She Thinks She Speaks for All Christians 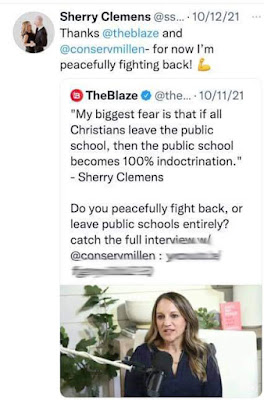 In Richardson ISD's June 18th runoff election for its District 2 seat on the Board of Trustees, I'll be voting for Vanessa Pacheco. I won't be voting for Sherry Clemens because of dealbreakers like this: she thinks she speaks for all Christians. Needless to say, she doesn't.

In a podcast for conservative media outlet "The Blaze" (Glenn Beck's creation), Clemens said, "My biggest fear is that if all the Christians leave public school, then the public school becomes 100% indoctrination." Clemens is wrong in thinking that all Christians share her belief that a secular public school education is not compatible with religious belief. Thousands of parents of many Christian denominations — Baptists, Methodists, Presbyterians, Catholics, etc. — as well as Muslims, Jews, Buddhists, and many other faiths, have no trouble sending their children to RISD public schools and maintaining their religious faith traditions. By treating all religions equally and not favoring one over any other, secular public schools protect all religions, including Clemens's own brand of Christianity. Clemens can raise her own children in whatever faith tradition she believes is best, but she shouldn't be allowed to impose her religious beliefs on the 38,000 other children in RISD.

Thanks Mark--for the thoroughly explained commentary about public education. I am always searchiing for ideas that bring light and comfort. They seem to be in short supply.