Dealbreaker #1: She's Extreme, Even for Conservatives 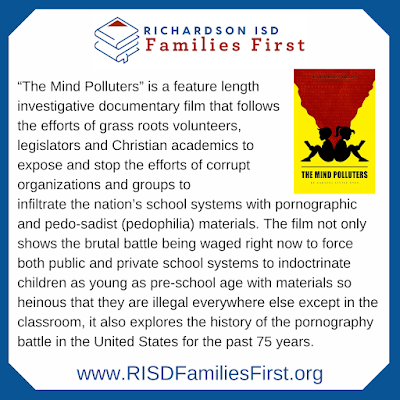 In Richardson ISD's June 18th runoff election for its District 2 seat on the Board of Trustees, I'll be voting for Vanessa Pacheco. I won't be voting for Sherry Clemens because of dealbreakers like this: she promotes extreme propaganda like "The Mind Polluters."

The "Richardson ISD Families First" PAC held a fundraiser at which they showed "The Mind Polluters." Who do they consider to be "Mind Polluters"? Teachers, among others. You know, the dedicated people who teach our kids, all of our kids. Think of the teachers you know. The people who teach kids to play fair, to not hit people, to not take things that aren't yours. The people who read Dr. Suess's "Green Eggs and Ham" to our kids in first grade. The movie accuses them of "indoctrinating children as young as pre-school age with materials so heinous that they are illegal everywhere else except in the classroom." People who believe this are extreme, even for conservatives. That brings us to Sherry Clemens. She is aligned with the people who spread this propaganda, the "Richardson ISD Families First" PAC. She contributes money to them so they can afford to have screenings of this propaganda. They endorse her because they want this propaganda to become Richardson ISD policy.

Not for many. Wanting to know what teachers are teaching is a good agenda.

No one is opposed to people, especially parents, wanting to know what teachers are teaching. The teaching curriculum is approved at the state level, Board level, and by curriculum committees. Most teachers post their curriculum online for parents, and maintain an open channel for communications.

More to the point, spreading fear, misinformation, paranoia, and outrageously false claims about what teachers are teaching--or might be teaching--is a VERY VERY BAD agenda. It promotes a state of constant anxiety within our society that malicious evil forces are "out to get us". That they are "indoctrinating" our children rather than "teaching" them. It promotes mistrust, and even hatred, within the community and even between neighbors.

I oppose that agenda. Unequivocally.