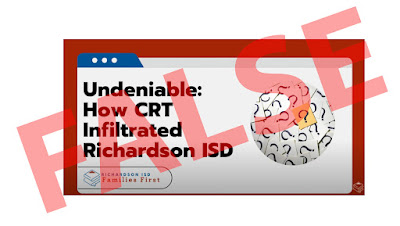 In case you still wonder, CRT is not a subject taught in public schools in Richardson ISD, nor anywhere else in Texas. It's against state law to teach CRT in Texas public schools. Where does the myth that it's in RISD come from and why is it so hard to put down? In part, it's because partisans wanting to take over school boards know that people have bad connotations for the words "critical," "race," and "theory." Put them together and people think surely CRT must be something really bad, even if people can't say exactly what it is. If critics actually define the term CRT, they fall back on making up their own definition. And their own definition is something even libtards agree is bad. It's a straw man that the critics erect because it's easy to argue against. But it's not being taught, no matter how many times the critics cry "CRT, CRT, CRT."

Let's back up. First, let's explain what CRT is. Then we'll give an example of what the anti-RISD school board candidates say it is. The difference will be obvious. The Texas Tribune helpfully offers a neutral definition: "Critical race theory is the idea that racism is embedded in legal systems and not limited to individuals. It’s an academic discipline taught at the university level."

Snooze. Nothing to see here. So critics of RISD rely on supplying their own definition of CRT. A YouTube video (I'm not linking to it because I don't want to give it any more publicity than I have to) makes an audacious charge: "Undeniable: How CRT Infiltrated Richardson ISD." The video was made by the "Richardson ISD Families First" PAC, which has endorsed Sherry Clemens and Jan Stell for the Richardson ISD Board of Trustees. The first few seconds of this campaign ad make my point for me. A graphic asks and answers:

"What is Critical Race Theory (CRT)? According to CRT: Everything that makes up American Society is racist. This includes Christianity, free markets, traditional marriage, rule of law, traditional family structures, and a representative form of government."

Critics should say exactly what parts of RISD's actual policy they think are harmful to students. Let's start with the purpose:

"The purpose of this policy is to establish a framework to eliminate any bias, prejudice, or unlawful discrimination that may affect student achievement and learning experiences and to promote learning and working environments that welcome, respect, and value equity, diversity, and inclusion."

There is nothing there about all that stuff the PAC says that CRT is all about. Exactly which words here are bad? Exactly which words aren't things that the critics teach their own children at home? People should demand answers from those who cry "CRT, CRT, CRT" again and again.

We could go on. The policy includes definitions. For example, "Equity: The condition that would be achieved if one's identity no longer predicted, in a statistical sense, how one fares." The critics never object to that. Again, they redefine equity to mean something else and then object to that straw man. Despite the critics' charges, equity doesn't mean socialism; it doesn't mean equal outcomes.

The RISD's Equity, Diversity, Inclusion Policy contains 1,289 words. Surely critics should be able to identify some of them as being unacceptable, right? Apparently not. In that whole 13-and-a-half minute YouTube video, the PAC quotes from the policy exactly zero times. Instead, they spend much time on excerpts of supplemental readings and videos, most of which had me scratching my head. Where in this or that, I wondered, is there anything to support a charge that the RISD paints with a broad brush that "Christianity, free markets, traditional marriage, rule of law, traditional family structures, and a representative form of government" are racist?

When called on it, the criticism slyly morphs into a charge that RISD is teaching "CRT-esque ideologies". That's even harder to pin down. Critics should get specific, if they can. Until they tell us exactly where in the state's TEKS, where in the RISD's policy, or where in the curriculum, are words that support their own unique definition of CRT, until they do that, they don't have a smoking gun. They are only blowing smoke. Critics object to being accused of fear-mongering, but what else should we call deliberately arousing public alarm about things that aren't being taught in RISD? Don't let their fear-mongering deter the worthwhile efforts that are underway in our schools, efforts to increase equity, diversity and inclusion.

After a 30 year career in marketing, I became an AVID Tutor at Berkner High School in 2016. I've been in countless classrooms during that time, and the idea that teachers or administrators are pushing less than wholesome values is absurd and frankly insulting. The educational professionals I've encountered are focused on preparing young people for success in life. They go out of their way to provide support and encouragement to EVERY child that walks through the schoolhouse doors. They need board members and concerned citizens that strengthen their efforts, not those who promote some half-baked idea designed to scare people into supporting them.

Richard Luttrell, thanks for your testimony from inside the classroom.

Well written article, Mark. I think you missed your calling, you should have been an investigative journalist. While what is happening in the RISD elections is a microcosm of what is happening nationally, it astounds me there is even debate about CRT. One need only look at policies like "Red Lining" (Read the book, "The Color of Law" for an excellent analysis of this) or the implementation of the G.I. Bill after WWII - which helped innumerable white veterans while essentially shutting out 1.2 million black veterans to understand that in these United States, there has been structural racism in political policies and institutions. For crying out loud, even the rounding up of Japanese during WWII was a form of structural racism! Does that mean Christianity, Capitalism, etc. is bad? No, it simply means we need to recognize we have not been fair to all citizens and do a better job in the future to offer the same opportunity to all.

Thanks again for a great article.

Gary Beach, thanks for the feedback. To clarify, the validity of CRT is not the point here. I make two other points. 1) Anti-CRT critics make up their own definition of what CRT is, a definition not used by those who teach CRT. 2) Regardless, CRT is not taught in RISD, certainly not the CRT as defined by the critics.

Mark, out of curiosity, have you reviewed the lessons provided by RISD’s Equity, Diversity, and Inclusion group? Because if you haven’t, you will have to schedule an appointment to do so. You seem to be missing a point of view on this topic. See web.risd.org/equity/

Our students review this material twice a week for 25 minutes. Why is the material so guarded compared to the core-curriculum?

When I study the resources that were used to create the lesson guides for our teachers (i.e. Learning for Justice sponsored by the SPLC) I would argue that politics are already in our school.

Wether or not you call it CRT, I don’t want my children at these young ages learning material from SPLC (especially with it’s checkered history).

Which leaves me wondering... If they have made opposition to CRT a central theme of their campaign, and CRT isn't actually being taught in RISD, then what is their actual agenda? What are they really trying to accomplish?

One possibility is that they believe their own hype about CRT. This is a possibility, in that it exploits certain innate aspects of human cognition, including anchoring bias, " a cognitive bias that causes us to rely too heavily on the first piece of information we are given about a topic" or familiarity bias, "a psychological phenomenon by which people tend to develop a preference for things merely because they are familiar with them". Either of these will manifest as confirmation bias, "the tendency to search for, interpret, favor, and recall information in a way that confirms or supports one's prior beliefs or values".

There are numerous other psychological factors at play here, which is concerning, as all of them distract us from the objective reality of the situation. In consequence, rather than being able to engage in a fact-based, rational dialog relating to education issues, we devolve into emotionally-motivated partisan tribal differences.

...which in my view is neither in our children's nor our community's best interests.