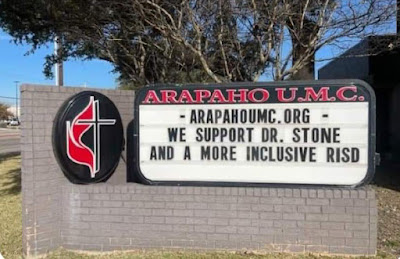 Monday evening, the Richardson ISD Board of Trustees had a special called meeting with a single item on the agenda: a closed meeting for "Superintendent's Evaluation."

Long story short, we still don't know the end of this story. The school board met in closed session for over five hours and adjourned without returning to open session, taking any votes, or making any announcements. But don't let that stop me from speculation.

Monday's meeting followed a similar closed session at the board's last meeting on November 15, which was reported on here: RISD: The Night of the Long Knives. As I said then, "No action was taken immediately after the end of the closed session near midnight, but if a departure is being arranged, legally, financially, and politically, it wouldn't be surprising if it couldn't all be finalized in one late night session. The handwriting is still on the wall, if the exact timing remains unknown."

The timing may still not be known for sure, but I see nothing here to change my earlier speculation that the handwriting is on the wall. I believe that Monday's interminable board meeting *probably* concluded with a board agreement to buy out Dr. Stone's contract in a mutual agreement for her to depart RISD. If so, Monday, December 6, 2021, will forever be known here as RISD's own "Night of the Long Knives." The next board meeting will make it all offical.

The only thing left to figure out is whose fingerprints are on the knives. I wasn't in the secret board meetings. I don't have recordings of trustee conversations inside or outside those closed meetings. What follows is merely speculation based on my observation of public events over the last months.

Dr. Stone's departure will not be a surprise. And it's not due to public vilification. Unfortunately, public vilification is all too common for public figures today. The challenge of being in education, whether as a teacher, principal, or superintendent, requires the skills of a diplomat and the backbone of a strong-willed person. Dr. Stone has both. She departs RISD not because of the challenge faced by many but because she lost the support of her bosses, the Board of Trustees. But "lost their support" is not quite right. She was hired by a different board in 2017. She didn't lose that board's support. In just the last two and a half years, there has been a huge turnover in board membership. What the new board lacks in experience, some of them compensate for with overconfidence in their own expertise. Today, there are only two board members I think reliably support Dr. Stone's approach to policy. I think three others probably drove Board President Karen Clardy to resign in August. Now they are driving the Superintendent into leaving as well.

The two most controversial issues RISD faced in 2021 were related to RISD's efforts to promote Diversity, Equity, and Inclusion and the district's actions to combat COVID-19. Both efforts are now at risk of being undermined or abandoned.

The board no longer has a majority with the backbone to resist those who will sacrifice "Public Health" in the name of "Personal Liberty". Two board members opposed the district's lawsuit against Texas Governor Greg Abbott's ban on face mask mandates. Board President Clardy's motion to offer incentive pay to teachers to get vaccinated faced enough board opposition that she withdrew the motion. It's difficult to imagine how serious an infectious disease outbreak would have to be for a majority of this board to take action.

As for Diversity, Equity, and Inclusion, that policy is one of Dr. Stone's signature achievements in her five years as superintendent. She championed that up until the end, without the board as a whole having her back.

The blame for this lies at the feet of the current Board of Trustees. As I said after the recent mandatory team training session, "My quick takeaway: if the RISD school board is dysfunctional (and I think it is), this team-building training is not likely to change much. What the trainer had to say was excellent, but what this board needs is not training, it's counseling."

One speaker during the public hearing at the November 4th board meeting was Reverend Cathy Sweeney of Arapaho United Methodist Church. The school board showed no sign of listening to her at the time, so let me repeat her words now and hope the school board has a change of heart if they are faced with the prospect of finding a qualified replacement for Dr. Stone.

My name is Reverend Cathy Sweeney and I'm here along with Senior Pastor Scott Gilliland and Pastor Maggie Proshek and Pastor Eliana Rios to represent Arapaho United Methodist Church, which is located at Arapaho and Coit. I'm a 29 year constituent of RISD and called Richardson home for 26 years. Our daughter and son attended Mohawk, North Junior High and JJ Pearce. And here are three perspectives: pastor, longtime constituent and parent.

Arapaho UMC wholeheartedly supports the Equity, Diversity, and Inclusion program and the positive effects that it has on students and families. EDI encourages empathetic conversations among students and prepares them to look beyond themselves and include their higher power in their decision making. And I'm here to tell you it's important especially with the current divisive rhetoric in our community. AMC sits in District 1 of RSD. Through public comments to this board, you've been led to believe that District 1 and the Mohawk constituents specifically, have very few supporters of EDI. That's far from accurate, and many of our neighbors have encouraged me to speak on their behalf here in support of continuing with EDI. You'll find many of them listed as signers on the letter of support for Dr. Stone and the Office of Equity, Diversity and Inclusion. We have residents and families of most religions, ethnicities, races, languages and income levels within the district. Please don't assume that the voices you have heard today represent all the families of District 1. They do not.

Everyone is entitled to their own opinions, but they're not entitled to their own facts, a summary of a quote credited to many individuals in history. Two facts. The Texas average school district performance in 2020 for third graders at the "meets" level in reading and math from the state was lower compared to 2019. Likewise, Richardson School saw a similar trend, but it was not as severe as the decline of the state average.

Thank you for your time. There's an attachment.

The Dallas Morning News is today reporting the news that was first chronicled here: https://www.dallasnews.com/news/education/2021/12/10/richardson-schools-superintendent-jeannie-stone-to-resign/.