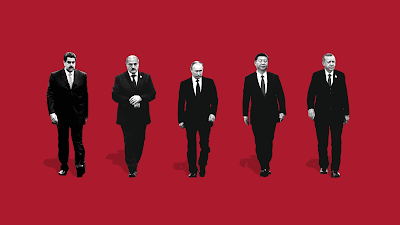 I'm not in position to set foreign policy for the U.S. Government. More and more I'm thinking that's a good thing. Because a couple of my notions about wise foreign policy have proven to be, how do I put this, disasters for America and the world. Live and learn, amiright?

Anne Applebaum is a staff writer for "The Atlantic" and a Pulitzer-prize winning historian. In her recent cover story, "The Bad Guys are Winning", she explains why. "If the 20th century was the story of slow, uneven progress toward the victory of liberal democracy over other ideologies—communism, fascism, virulent nationalism—the 21st century is, so far, a story of the reverse."

My notions are bound up in those heady dreams of the late 20th century. When the Soviet Union and international communism collapsed, I bought into the prevailing wisdom of George H.W. Bush's New World Order, the hoped for period of Great Power cooperation he tried to bring about.

The other notion that I bought into was Thomas Friedman's 1990s concept of globalization. In his theory, as global supply chains became more tightly integrated, world peace would follow. This grew out of the "Golden Arches Theory of Conflict Prevention", which was based on the claim that "No two countries that both had McDonald's had fought a war against each other since each got its McDonald's."

We know how both those notions turned out. Not as envisioned.

Among modern autocrats are people who call themselves communists, nationalists, and theocrats. No one country leads this group. Washington likes to talk about Chinese influence, but what really bonds the members of this club is a common desire to preserve and enhance their personal power and wealth. Unlike military or political alliances from other times and places, the members of this group don’t operate like a bloc, but rather like an agglomeration of companies—call it Autocracy Inc.
Source: The Atlantic.

Instead of the fall of communism and globalization having a democratizing effect on Russia and China, the opposite happened. The Wild West investment opportunities in Russia and China corrupted American capitalism, and with it, its captured system of government as well. Applebaum asks, "How have modern autocrats achieved such impunity? In part by persuading so many other people in so many other countries to play along."

The list of major American corporations caught in tangled webs of personal, financial, and business links to China, Russia, and other autocracies is very long. During the heavily manipulated and deliberately confusing Russian elections in September 2021, both Apple and Google removed apps that had been designed to help Russian voters decide which opposition candidates to select, after Russian authorities threatened to prosecute the companies’ local employees.
Source: The Atlantic.

And it's not just American corporations. The American government played along, too.

In 2008, Trump Jr. had told a business conference that "Russians make up a pretty disproportionate cross section of a lot of our assets," and in 2016, Russia’s long-term investment in the Trump business empire paid off. In the Trump family, the Kremlin had something better than spies: cynical, nihilistic, indebted, long-term allies.
...
In 2008, the Russian oligarch Dmitry Rybolovlev paid Trump $95 million—more than twice what Trump had paid just four years earlier— or a house in Palm Beach no one else seemed to want; in 2012, Trump put his name on a building in Baku, Azerbaijan, owned by a company with apparent links to Iran’s Revolutionary Guard Corps. Trump feels perfectly at home in Autocracy Inc., and he accelerated the erosion of the rules and norms that has allowed it to take root in America.
Source: The Atlantic.

It's not just the American Right that failed us. The American Left is failing us as well. Here's another of my own notions that, taken to an extreme, has more potential downside than upside.

At the same time, a part of the American left has abandoned the idea that "democracy" belongs at the heart of U.S. foreign policy—not out of greed and cynicism but out of a loss of faith in democracy at home. Convinced that the history of America is the history of genocide, slavery, exploitation, and not much else, they don’t see the value of making common cause with [...] ordinary people around the world forced into politics by their experience of profound injustice. Focused on America’s own bitter problems, they no longer believe America has anything to offer the rest of the world.
Source: The Atlantic.

My optimism in the 1990s that free markets would lead to a wave of democracy spreading across the globe was bitterly dashed. Instead it was the Free World that was changed. It's as if Lenin's prophecy ("When time comes to hang the Capitalists, the Capitalists themselves will sell the rope for that.") came true, but only after Lenin's ideological Soviet state was replaced by Autocracy Inc. I can't go back and rewrite history, but if I could I would look to advocate for the another foreign policy than I did the first time.