I Have Seen Texas's Future 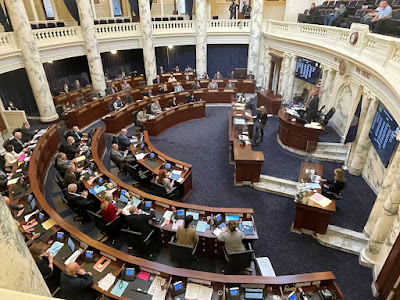 The anti-maskers, anti-vaxers, anti-diversity, anti-LGBTQ, anti-library, anti-education zealots in Texas just think they are the leaders in moving America ahead by taking it back. They aren't. Texans are followers. The real leaders of the "anti" movement are elsewhere. To see where trends in Texas are leading, look to Idaho.

Why don't we hear more about Idaho? Perhaps because Idaho is small. Perhaps because it's far away. Say Idaho and most people think of potatoes. Think harder and maybe preppers, fugitives, and separatists come to mind. Those fringe characters used to be confined to the deep woods. More and more they live openly in cities like Boise and are taking over state government at all levels. They are two steps ahead of even Texas in taking the state backwards. If you want to see where Texas is going, look to Idaho. The Oregonian published a story titled "War on Public Education in Idaho causes businesses to rethink locating, expanding there."

Political hostility to public education in the Republican-dominated Idaho Legislature is causing some businesses to doubt the wisdom of moving to or expanding in a state that ranks at or near the bottom in what it spends on K-12 students and has one of the nation’s worst graduation rates.

The Legislature also targeted higher education earlier this year when it cut $2.5 million from universities despite a budget surplus. An influential libertarian group that wants to abolish public education entirely says it will push for a $20 million cut to universities in 2022.
...
For preschoolers, lawmakers earlier this year rejected a $6 million early childhood learning federal grant from the Trump administration. One Republican lawmaker said he opposed anything making it easier for mothers to work outside the home.
...
According to the National Education Association, the $7,705 Idaho spent per student in the 2019-2020 school year ranked it last in the nation.
...
"Our public schools are grotesque, and adding more money is not going to solve the problem," [the president of the influential, libertarian Idaho Freedom Foundation] Wayne Hoffman, said during a speech in northern Idaho earlier this month. "The government should not be in the education business. They’re brainwashing our kids."

If all that doesn't sound familiar enough, consider this paragraph, which reads likes something that could have been ripped from this month's RISD's "School Times".

In northern Idaho, the Northwest Commission on Colleges and Universities is reviewing the accreditation of North Idaho College after three of the five nonpartisan board of trustee seats were won by candidates backed by the far-right Kootenai County Republican Central Committee. With the majority, the board without cause fired the college president.
Source: Oregon Live.

There's an unfolding unnatural disaster happening in Idaho. With the recent election of stealth "anti" candidates to the Richardson ISD Board of Trustees, and the subsequent ouster of the superintendent by the new majority, the unnatural disaster is unfolding here at home, too. I've seen Texas's future. It's in Idaho.

It is so easy, for us, to move our righteous anger to hatred as humans. You should have added "anti abortion" to your list of antis to further inflame the smug democrat personality as well as further demonize the republican party.


So easy to move from a voice of reason to useful idiot. We all need to be careful.

All of your "anti"stances have complicated nuances.

We have learned, according to the cdc, that cloth masks on our kids are not effective, but we must do whatever can to help others.

To further complicate the situation, the democratic party has thrown up its hands and stated the solution to the pandemic is a states issue. The federal government has pulled out, and given up that ground. Seems to be a theme of this administration.


We have learned vaxes are far from perfect, but are a primary tool in our arsenal against this. It is now the states responsibility.

Diversity never gets solved until it is openly acknowledged one size does not fit all. Public schools are tasked with being the primary academic facilitator as well as the front line of the government welfare system.Tough job, especially when we are afraid to address root causes.

One does not have to be anti LGBTQ to realize the woke policy of having biological men competing with girls in sports is not only lunacy, but degrades everything women have done to carve out their place in society.

I can go on, but the point is, please don't move from historical recorder/pro risd, to using kids for political purposes.

We have enough of that on the two politics Facebook pages. Two pages that have become irrelevant as rational people see them as simply angry people about their own lives, with their own self serving agendas. We all know it.

Jeannie will be fine. So will r.i.s.d.

But, young parents believe the world begins and ends with them. I get it.

Marcia Grau - In addition to what Bryan said above, Idaho had 90% participation on the SAT where Texas only shows 59%. Idaho shows a score of 985 vs Texas at 1003. Everyone knows throwing money at it will not fix the education problem. Don't let the loud voices prevail over what is right.

Bryan Holland and Marcia Grau, thanks for the feedback. The premise of my post is that what's happening today in Idaho is what will happen in the future in Texas. I can't tell from either or your comments, while thoughtful, whether you agree with that premise.

Marcia Grau- The fringe element extremists at either end of the political spectrum will take over if we allow them to. I hope we won't because we will all suffer from following fanatics.

I don't know what you mean by "stealth "anti" candidates" on the BOT. Were some elected unfairly?

I also do not get the part about why a college's accreditation would be questioned simply because of which party supported their Board's elected officials. Accreditation should depend on what the college teaches and the standards they uphold. This appears their accreditation is being threatened as punishment for electing the "wrong" candidates in a (as far as it says) fair and honest election. Who does that remind you of?

President Biden fired the General Counsel of the Labor Board for no cause and replaced him with his own person upon taking office. This is all normal politics.

I'd be more interested in whether Idaho is doing a good job educating students. Based on SAT participation and scores, Texas maybe should look at what they are doing right instead of just assuming the political involvement of Libertarians and Republicans automatically condemns them. Democrats are far from the only people who care about our future.

Marcia Grau, thanks for the additional feedback. I am not suggesting that the elections in Idaho or RISD were "unfair." I am not suggesting that the accreditation questions about North Idaho College are "simply because of which party supported their Board's elected officials." And I'm not "just assuming the political involvement of Libertarians and Republicans automatically condemns them."

What I did suggest was the same electoral swings that elected a new majority on the North Idaho College board of trustees appear to be changing the makeup of school boards here in Texas, too. Idaho may even be ahead of us on this and other fronts.

By the way, the accreditation questions about North Idaho College are related to complaints about the behavior of the new trustees, not their political affiliation. Whether Idaho is "doing a good job educating students" is exactly what is being called into question with the recent news from Idaho. Idaho is in the bottom five in the nation in high school graduation rates.

"There is a small, extreme right-wing view out there that is hostile toward public education and opportunities for Idahoans," said Alex Labeau, president of the Idaho Association of Commerce & Industry. That's not "Democrats" saying that, it's a business lobbying group.

Marcia Grau again - I was going by what you chose to post.

You included no information about why their accreditation is being questioned except for the party affiliation. Now you have added that the challenge was prompted by the trustees behavior rather than the school's students not exhibiting they have attained the required standards.

Considering the number of students who are promoted without having the needed skills to succeed in the next grade and graduate high school without us making sure they have attained the education they deserve, I am more impressed by SAT scores than graduation rates.