TIL: History is Never Static 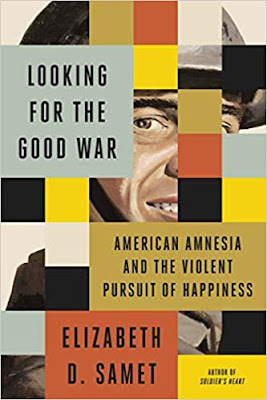 I grew up thinking World War II was the "good war" and the Vietnam War was the "bad war." And the Korean War was something in between, on the slide from good to bad. Later, the Gulf War was another good war ("By God, we've kicked the Vietnam syndrome once and for all," President George H.W. Bush exulted.) at least until it all went to hell in Iraq and Afghanistan. Those two wars are too recent for us to have settled on a stable mythology yet. But World War II's myths have been cemented in place for a long time. Woe be to anyone who dares interfere with our national myths. Maybe that's changing.

In Carlos Lozada's book review of Elizabeth D. Samet's "Looking for the Good War" in New Yorker, I learned that much of what I grew up believing about World War II is painted at least as much by mythology as historical fact.

The mythology of the Second World War features six main elements, by Samet’s tally: that the United States joined the war in order to rid the world of tyranny and Fascism; that "all Americans were absolutely united" in their commitment to the fight; that "everyone" in the country sacrificed; that Americans got into the war reluctantly and then waged it decently; that the war was tragic but ended on a happy note; and, finally, that "everyone has always agreed" on the first five points.
Source: New Yorker.

Think about a student of history seeking to earn a doctorate. He or she is obligated to do some original research. What does that mean? It means literally digging up artifacts of a past age or figuratively digging up old records or diaries, all in an effort to shed new light on history that enables us to understand the past in a new way. Does this change history? It does if it's done right.

You'll have to read the book (or at least Lozada's review of the book) to learn how Elizabeth D. Samet is changing the history of World War II seventy five years after its end. She not only digs up original sources revealing facts that disagree with the myths, she also identifies how the myths themselves originated.

Samet is a professor of English and the author of works on literature, leadership, and the military. It's hard to paint her as an unpatriotic leftist. She teaches at the U.S. Military Academy at West Point. The next generation of military leaders might just be freed of the myths that colored my generation's view of history. Such is the continually evolving understanding of what really happened.

at 6:00 AM
Email ThisBlogThis!Share to TwitterShare to FacebookShare to Pinterest
Labels: Books