RISD School Board Goes To School 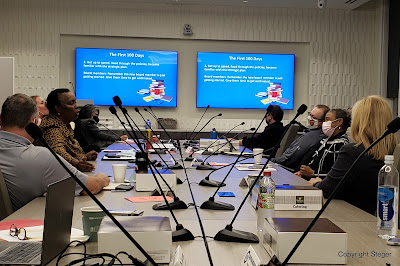 The trustees of the Richardson ISD school board held a three hour training session Tuesday night on team-building. You might think this was well-timed, given recent events, but it's been on the board calendar all year. Texas State law requires team-building training every year. This week was RISD's turn. The trainer was Kay Douglas from the Texas Association of School Boards (TASB). She was excellent. She is knowledgeable, experienced, and generous with sharing her learned wisdom.

My quick takeaway: if the RISD school board is dysfunctional (and I think it is), this team-building training is not likely to change much. What the trainer had to say was excellent, but what this board needs is not training, it's counseling.

To be sure, everyone was on their best behavior. Certainly, there were no fireworks or fisticuffs. At the other extreme, there was no going around the room with people saying, "Hello, my name is X and I'm a dysfunctional board member." The board pretty much ignored the elephant in the room. It didn't consider the possibility that the resignation of the board president a month ago might indicate a serious problem within the board itself. There was no attempt to get to the bottom of that, no introspection, no self-questioning, no acknowledgment of fault on the board's part.

Lesson for school board members: "You're elected as an individual, but you must govern as a team...Your success as a board member is completely dependent upon the success of your board."

Douglas told a story about when she served on a school board. She said someone wrote a letter to the editor saying all the board trustees were idiots except for her. She said she called the person and said, "You cannot trash the board without trashing me." If there's one lesson that I hope the RISD board learns, it is this. If RISD is failing, it's not the public's fault. It's not the teachers' fault. It's not the administrators' fault. It's not the fault of this board member or that or the superintendent or any single person. It's a failure of the whole board.

Even though the training was for school board trustees, there was a lesson Kay Douglas imparted that works for the general public, too.

Every problem does not rise to be a school board issue. One of the board members said his own child complained about the mashed potatoes in school lunches. As much as a child might think that's ruining his life, it's not a board issue. If trustees get involved in day-to-day operations, they inevitably undermine others who have responsibility in that area, while taking their own focus away from the responsibilities that a trustee alone has. So, parents, if trustees advise you whom to take your concerns to, they are not putting you off. They are dealing with a problem in the most effective and efficient manner that a large school district of 38,000 students can. (As for the trustee and his child's mashed potatoes, he faces a unique challenge. He can't take his child's complaint to the school as just a concerned parent. That's not how he'll be perceived. A trustee can't ever take his trustee hat off.)

Confidential to whom it may concern: don't drop the ball on diversity, equity, and inclusion. COVID-19 is important, but it will pass; the other challenge is forever.

It is difficult to tell if this is an inherent flaw in this generation of parents, or perhaps we have always been this way and thry carry the added burden of 2 politics pages actively stirring them up.

Regardless, all this will pass and history will not shine kindly on those who built politics pages to push their own personal agendas at the expense of others.

I feel bad for both of them

Best thing both could do, and they won't due ro their enormous egos, is take their pages private.