Why I Support SEL, In One Parent's Story 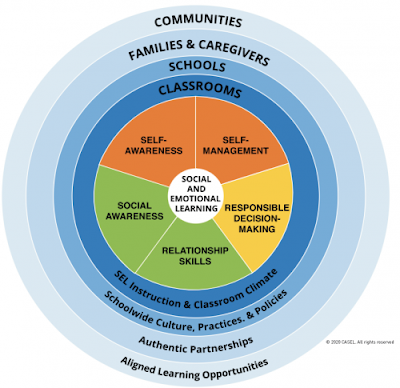 When I grew up, bullying happened. It was frowned upon by teachers, but behind the teachers' backs, in the lunchroom, on the playground, bullying went on undiminished. Why? Because kids weren't taught how to deal with it themselves. Instead, kids were taught to take it without whining. Or, worse, to fight back and risk getting beaten up. Both methods were failures. Relying on teachers being the enforcers makes bullying worse ("Cut it out or I'll tell the teacher."). What was needed was teaching kids a better way to deal with bullies. And teaching bullies a better way to deal with the feelings that caused them to bully.

That brings me to a modern approach: SEL. SEL stands for Social Emotional Learning. Here's how SEL is described by CASEL, a non-profit organization formed to promote it: "SEL is the process through which all young people and adults acquire and apply the knowledge, skills, and attitudes to develop healthy identities, manage emotions and achieve personal and collective goals, feel and show empathy for others, establish and maintain supportive relationships, and make responsible and caring decisions."

That's a mouthful, right? Let's just call it anti-bullying. It's more than that, but that's the part that interests me here. Teach kids the skills needed to deter bullying. Here is one parent's story about SEL that I find heartening. It's from Facebook. I've deleted the names involved.

My son, who is 16 and autistic, is in 10th grade and has several AP classes. My son is not gifted, he works hard to learn and RISD has led him there through his education. Because of SEL and EDI he has had the opportunity to be mainstreamed with his peers and has benefitted greatly from kids learning about and empathizing with people who have differences. I’m more concerned about the asshole kids who don’t get SEL at home who have told my kid he should commit suicide. That’s what that kid was taught at home. If not for SEL, a whole table full of kids would not have stood up for my kid and tell the emotionally stunted kid to kindly piss off and leave my son alone. This was a popular kid that most kids won’t stand up to. If not for SEL, those kids would not have stood up for my son. SEL and EDI are every bit as important as reading, writing, and math and it should be taught at school because it’s NOT being taught in many homes. You also see many parents who lack SEL & EDI and it shows. We have many show up at our board meetings pissed off that school is more equitable for all and their little Johnny doesn’t get the extra boost up by suppressing someone else.
Source: Facebook.

If stories like this one are common, maybe SEL is already doing as much good as all the scolding of bullies done by teachers during my own school days. Let's give it time to work and see.