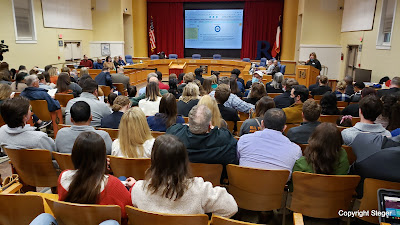 Where it all went down

What just happened? Superintendent Dr. Jeannie Stone is out. Dr. Stone and the RISD have reached a mutually acceptable agreement for Dr. Stone to resign her position.

Did she really resign? Yes. Really. The resignation will be effective August 31, 2022, or her first day of employment in another TRS eligible position, whichever is earlier.

Is she still employed? Yes, until August 31, 2022. With the appointment of Deputy Superintendent Tabitha Branum as interim superintendent, Dr. Stone has been reassigned to the position of Transition Liaison. In short, she will continue to be paid while having minimal, or no, duties.

Was she fired? No.

Was she forced out? It depends on what you mean by "forced." Dr. Stone voluntarily signed the separation agreement, so in that sense, her departure wasn't forced. But hostility by board members toward her made it impossible for her to continue to be effective in the position, so in that sense her departure was forced. You decide. We'll never know all the details of the boardroom environment because the separation agreement requires all parties to refer any inquiries to the statement released as part of the agreement.

Why did she really resign? Sharon Grigsby of The Dallas Morning News, after interviewing former president of the Board of Trustees Karen Clardy, put it well. "Underneath all the legal language, you’ve got a superintendent who had no choice but to resign because she lost the backing and trust of her board."

Was the board vote to accept her resignation unanimous? Yes.

Does that mean all the trustees wanted her gone? No. Each trustee would have to answer this question him or herself, but reportedly two trustees (Regina Harris and Debbie Renteria) were consistently supportive of Dr. Stone. Other trustees, to a greater or lesser extent, reportedly were not.

How much money is RISD paying her? RISD agreed to pay Dr. Stone her full salary and benefits through her resignation date of August 31, 2022. According to a June 2020 amendment to her employment contract, Dr. Stone's salary is $327,078.00 per year. The value of other benefits aren't specified. This is considerably less than what Dr. Stone would have received if she had served out the remainder of the current term of her contract, which expires June 30, 2025. Call it a partial buy-out of her contract.

When will a replacement superintendent be appointed? That's up to the Board of Trustees. The board has not announced a timetable.

Does this all suck? Most definitely.

What can I do? Vote.

If you have other questions, leave them in the comments.

As the board is our employee (taxes) why d0 we not have any say in anything?

Frankctx, that's the fundamental question of representative democracy. But just because one election resulted in disappointing trustees, that doesn't mean the next election can't have better results. Next time, pay closer attention to the voters guides. ;-)