Want RISD Elections to be Nonpartisan? Say Something.

Call out political parties who insist on turning our local elections into partisan affairs. 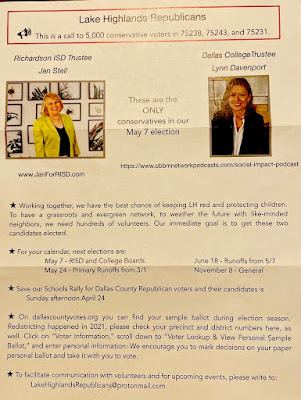 You know how I feel about keeping local city and school elections nonpartisan. I have always wanted state and national political parties to stay out of local elections. I have called out both Democrats and Republicans when I feel they are crossing the line.

Just looking for an "R" or a "D" after a candidate's name will tell us nothing about whether a school board candidate is qualified and competent to run a school district. Would you choose your doctor simply based on how they vote in national elections?

Allowing Republicans and Democrats to fight it out in school board races invites a race to the bottom. Instead of working to reach consensus on the best way to teach third graders to read, we end up arguing over which of the many crimes a certain former president should be indicted and tried for. (See how quickly we can reach the bottom?)

That brings me to the Richardson ISD school board election. Early voting begins Monday, April 25, 2022. That's today. And like swallows returning to Capistrano, the opening of polling places brings out the worst in our politics. The Lake Highlands Republicans are circulating a red envelope with a flier with the large headline "Lake Highlands Republicans." The flier calls for "5,000 conservative voters" in Lake Highlands ZIP codes to vote for Jan Stell and Lynn Davenport (Dallas College District 1 candidate). The goal? "Working together, we have the best chance of keeping LH red."

Its a shame when crazies give conservatives a bad name. I am a true republican and find both of these candidates not only incompetent, but a stain on my conservative values, aa qwll as NOT true republicans. They are both disgusting.

Former RISD school board president Karen Clardy calls out Republicans for injecting partisan politics into a nonpartisan election. She doesn't hold back. Now it's everyone else's turn.