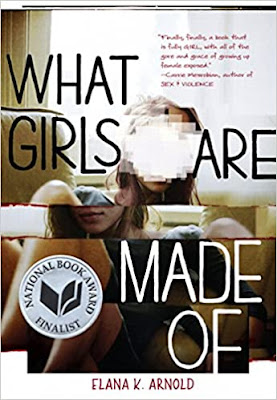 Source: What Girls are Made Of, by Elana K. Arnold.

During the public comment section of the April 11, 2022, Richardson ISD school board meeting, one speaker raised a concern about a book she says is in the school libraries of Berkner High School, Richardson High School, and Richardson West Junior High School. After warning audience members that they might want to leave the room, she read a long passage from the book. Or maybe it just seemed long. It was explicit. It was embarrassing.

Public speakers are given three minutes. I'm boiling down this mother's comment to six sentences:

"That's available in RISD schools for 12 year olds and up. I just don't even know what to say. I don't know how anybody can defend that. I don't know how society could benefit from schools supplying books like this to students as young as 12 years old or really any age. I don't want my senior reading that. She wouldn't want to read it."

The book she read from is "What Girls are Made Of" by Elana K. Arnold. It was a finalist for the National Book Award for Young People's Literature in 2017. Kirkus Reviews says, "Pulling back the curtain on the wizard of social expectations, Arnold explores the real, knotted, messy, thriving heartbeat of young womanhood." School Library Journal says, "Because of its complex symbolism and graphic imagery, this well-written novel is best suited to mature YA readers."

This is a controversial case. I won't try to defend the graphic sex scene in the passage the mother quoted. The mother quoted it verbatim at the school board meeting. I won't do that here even in my own personal blog. To judge for yourself, check the book out from a library. There's a copy in the great Richardson Public Library. Heck, I'm an adult of middle-age (cough, cough), I read a lot of books, but I don't favor passages that graphic.

If you do check out the book, don't skip over the bulk of the book looking for the explicit parts. Using that method to review books, you might be ready to ban the Bible. Instead, read the whole book. A lot of professional critics believe the novel does have value. Like I said, the novel was a finalist for the National Book Award for Young People's Literature in 2017. The publisher says the book's interest level is Grades 8-12. Publishers are trying to sell books, and interest level is not the same as suitability. In my own opinion (but remember, I'm just one person), the graphic sex in the passage the RISD mother quoted should restrict the suitability of the novel to older readers. Older than junior high. Older than freshman and sophomore in high school. The School Library Journal review says Grade 10 and up. I would say Grade 12. Maybe age 18. Young adult with the emphasis on adult. Legal adults attending high school, which is what many high school seniors are, shouldn't be denied access to critically acclaimed literature because of a graphic sex scene. But, again, that's just one person's opinion.

What do we do for the controversial books, the ones where there's a strong difference of opinion? Do we give veto power to the most restrictive opinions in the community? I hope not. Do we vote? I hope not. Do we require parental approval for children to check them out? Fine. Do we restrict books to age-appropriate audiences without removing the more mature books from the shelves altogether? I hope so. I suspect that describes RISD's current policy. If so, how can enforcement be more effective?

I haven't read the book so cannot comment on the questionable passage, except to note that writing taken out of context may make a different impact from what the reader would feel coming across the passage in the context of the entire narrative. But your post reminded me of an article published in NYTimes several years ago: "What Teenagers Are Learning from On-Line Porn." If there's any validity to the argument presented in this NYT magazine piece, we should all be concerned about how teen-agers are learning about sex. And what we may need is more open discussion, not less. Interesting that parents are so concerned about classroom discussions, where at least there's an adult in the room who can steer the conversation, when dubious material is so widely available on cell phones, social media, etc. Maybe we should put more emphasis on teaching our teenagers how to evaluate provocative or dubious content rather than silencing any mention of it. Because we can't ban it entirely, not really.
https://www.nytimes.com/2018/02/07/magazine/teenagers-learning-online-porn-literacy-sex-education.html