Judging Candidates by the Company They Keep

"Tell me the company you keep, and I will tell you what you are." — Miguel Cervantes 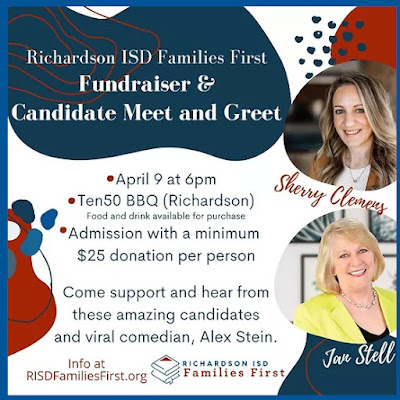 A political faction is active in the Richardson ISD school board election. They are raising money through a political action committee and are campaigning with candidates in a coordinated fashion. That faction is the Richardson ISD Families First PAC. The candidates are Sherry Clemens (RISD District 2 candidate) and Jan Stell (RISD District 5 candidate). Oh, and they are all palling around with a certain "viral comedian."

Clemens and Stell have accepted the PAC's endorsement and attend the PAC's fundraisers. Clemens has contributed to the PAC herself at least twice. The PAC promotes its values through an anti-LGBTQ propaganda movie, "The Mind Polluters," which it promoted in conjunction with the PAC's endorsements of Clemens and Stell. The movie calls teachers "mind polluters." It considers public schools to be indoctrinating children into "a worldview of rampant sexuality, homosexuality, and transgenderism normalized through the use of pornographic and pedophilic materials."

The PAC's most recent fundraiser (advertised above) featured Alex Stein, a publicity seeker who has been making the rounds wasting the time of city councils (Dallas, Mesquite, Richardson, and others) and school boards (Plano and others) to promote his career as a comedian in front of captive audiences. He apparently appeals to audiences who consider it funny for him to pretend to be a parent asking a school board to put a terrarium in his daughter's classroom because she "identifies as a lizard." Tucker Carlson of Fox News and conspiracy podcaster Alex Jones must have thought he'd appeal to their own audiences; they both featured him on their own programs.

If the issue of gender identity is "too scary" for Clemens's daughter to be exposed to, if she wants people to believe she cares about not just her own daughter, but all children, maybe she should not keep company with a PAC that hires a comedian who make jokes about the most vulnerable of our children.

"He that walketh with wise men shall be wise: but a companion of fools shall be destroyed." — Proverbs 13:20