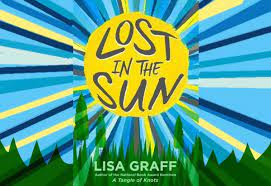 Source: Lost in the Sun, by Lisa Graff.

During the public comment section of the April 11, 2022, Richardson ISD school board meeting, one speaker raised a concern about a book her third grade daughter found in her school library.

Public speakers are given three minutes. I'm boiling down this mother's comment to three sentences:

"This week my third grader brought us her library book from school and told us she had found a bad word in it. So I took the book from her and read about 50 pages of it. [The word] that she had found, the 'a' word we'll say, [appears] five times in 50 pages."

Let's talk. So much to unpack here. Is the use of the word "ass" in that context reason enough to ban this book from an elementary school library? I'd say no, but I can understand why another parent might say yes.

Would a euphemism be acceptable? "You get your bottom in here right this minute." Would that be OK? Or isn't it so much the word used but the parenting that is the real offense here? The speaker sarcastically described it as "an example of some excellent parenting." How else can a strained relationship between a father and son be expressed in literature without antagonistic language? Antagonistic language often means bad language.

George Carlin became famous in 1972 with his comedy routine, "Seven Words You Can Never Say on Television." "Ass" wasn't one of the words. I won't mention what Carlin's seven words were (Google them), but I'll grant that I don't think any of them are appropriate in elementary school. I think I could even accept a policy that a simple word search that turned up any of Carlin's seven words would flag a book as being inappropriate for inclusion in an elementary school library. Maybe we can argue over just how many more words should be included in those search terms. That might reveal that it's not just the vocabulary, but the subject matter, that's really the issue.

Our speaker's complete objection to the library book her daughter brought home didn't rest just on its vocabulary. This parent dwelt more on the "very heavy, very traumatic story" itself. The book is "Lost in the Sun" by Lisa Graff. From the publisher's description: "Everyone says that middle school is awful, but Trent knows nothing could be worse than the year he had in fifth grade, when a freak accident on Cedar Lake left one kid dead, and Trent with a brain full of terrible thoughts he can't get rid of." A book review from School Library Journal says, "Weighty matters deftly handled with humor and grace will give this book wide appeal."

So maybe the problem isn't just the word "ass" but the "weighty" subject matter. The main character is in fifth grade. That's elementary school in RISD, even after we eventually move sixth graders to middle schools. Fifth graders experience traumatic events — divorce, suicides, accidents that result in the deaths of friends and family. Children sometimes blame themselves for these tragedies. Literature that sensitively deals with such weighty matters is entirely appropriate for fifth graders. This book seems like it could be one such book.

That this book is appropriate for fifth graders doesn't necessarily mean it's appropriate for third graders. Whether or not that's the case with "Lost in the Sun", it will be for some books. Maybe the question for RISD is how do we restrict books to age-appropriate audiences without removing the more mature books from the shelves altogether? Do we really have to limit the library shelves to books appropriate to first graders? I hope not.

We've heard from one member of the public. And now we've heard from me. I'd like to hear from RISD on what the current practices in RISD libraries are and how feasible it would be to add further checks to avoid a repeat of this experience for this mother? Come on, RISD. McKinney ISD can respond publicly to complaints such as this. You can too. Let's talk.

"But Rabshakeh said unto them, Hath my master sent me to thy master, and to thee, to speak these words? Hath he not sent me to the men which sit on the wall, that they may eat their own dung, and drink their own piss with you?"
— 2 Kings 18:27

RISD librarians are professional and careful in their selections of school library materials. You framed the issue appropriately: how can a library serving such a wide developmental audience and from families with a wide range of values be appropriate for all. It can’t. Frankly I think parents worry too much about the effect of “inappropriate” books. If to divergent from the child’s family values then it’s likely the child won’t be interested in or affected by any single book. The safety valve comes from parental involvement. If a child’s parents are offended by the word “ass” or the theme of the book then a conversation about the inappropriateness of the words or values in the story fixes things. The conversation perhaps offers alternative words or reasoned discussion why other values are better. The process strengthens critical thinking skills of the child and it doesn’t impinge on others family values. The tension between what people find in their environment and what they favor will never go away and this mild version that some discover in the very controlled environment of public school libraries should be a welcome learning opportunity.

"Parents worry to much about. . . " thats what parents do. Thats why raising kids is such an incredibly insane task (and thankless as parents will soon find out when they are older) the challenge with your blog is you are posturing the whole book concern thing around the word "ass". That is disingenious as we both know that is not the issue. The issue is more complex. It is a culture battle between a narcisstic generation of parents (i would suggest the progressive left is just as narcistic or more than the right) , who are forced ro learn how ro parent, versus a system that wants them to shut up and sit down. Fact is, whether you like this generation of parent or not, they arent 10 any more. They have to be engaged.

Bryan Holland, thanks for the feedback. If you'd read the entire blog post, you'd have seen that I said, "Our speaker's complete objection to the library book her daughter brought home didn't rest just on its vocabulary. This parent dwelt more on the "very heavy, very traumatic story" itself." I then addressed that part of her complaint in detail.