CRT, Book Bans and Me: Annotated 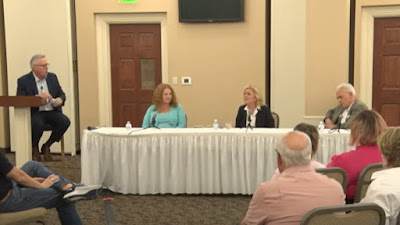 Wilshire Baptist Church hosted a panel discussion April 19 on "CRT, Book Bans and Me." It was moderated by George Mason, senior pastor. Panelists were Rev. Charlie Johnson, Founder & ED for Pastors for Texas Children, Casey Boland, US History Teacher at LHHS, and Dr. Jeannie Stone, Richardson ISD Superintendent 2017-2021. After listening to too many members of the public excoriate school leaders at too many school board meetings, for me this panel discussion was like a welcome palate cleanser. It was like, as George Mason put it, "a return to the old days of civility."

You can read a straight news story about the discussion in Baptist News Global. Or watch a replay of the whole panel discussion. All I intend to do here is randomly annotate a few of the panelists' comments with thoughts that occurred to me as I listened.

Casey Boland: HB 3979, the one that talks all about this, I have gone through it with a fine tooth comb. I do not do what it tells me not to do and I do what it tells me. I follow the TEKS for African American Studies. I follow the TEKS for AP US History. That's what we teach...I have yet to have a conversation with anybody who is upset about it who can explain to me what exactly they're actually upset about.
Source: Wilshire Baptist Church.

I predict that Texas HB 3979 will turn out to be not as dangerous as liberals feared and not as reactionary as conservatives who passed it hope. The law was carefully crafted to withstand Constitutional scrutiny. Two centuries on we are still arguing about what the Constitution allows and doesn't allow. I predict we'll argue incessantly about what HB 3979 allows and doesn't allow. Some conservative school districts may tell teachers to balance elementary school books about the Holocaust with ones "that [have] other perspectives", at least until others tell them that HB 3979 doesn't require such absurd neutrality. HB 3979 might even end up being used by liberals. Its prohibition on teaching that one race or sex is inherently superior to another is as likely to ensnare white Christian nationalist teachers as "woke" liberal teachers.

On when CRT became an issue:

Jeannie Stone: When did this happen? So I wrote this essay about it. And I talked in my essay about a school board, the very first school board meeting, where a parent spoke at the podium about CRT. That was the acronym she talks about, and seriously for the entirety of the meeting I sat there confused, thinking she was talking about something I was very familiar with - culturally relevant teaching.
Source: Wilshire Baptist Church.

Let's face it. As a political wedge issue for Republicans, "CRT" was dynamite. Few people even know what the acronym CRT stands for, to say nothing about what "Critical Race Theory" is. But it sounds scary. As Casey Boland said, "I have yet to have a conversation with anybody who is upset about it who can explain to me what exactly they're actually upset about."

Schools insist they don't teach "CRT," but it's too hard to make that case without getting into a college-level academic discussion about CRT. On the one hand, you have irate parents insisting, "No CRT." On the other you have teachers saying we don't teach pre-college students about the "cross-disciplinary intellectual and social movement of civil-rights scholars and activists who seek to examine the intersection of race, society, and law in the United States" (snooze). Public school educators lose that battle every time.

On what schools actually try to do:

This is the crux of the divide. Conservatives also recognize there's an achievement gap between races, they just disagree on what to do about it. They argue the way forward is to be blind to race, to treat every school, every class, every student the same. What they don't realize is that there is no race neutral way to do that. The educational paradigm they want was created by white, Anglo-Saxon Protestants, and it is anything but culturally or race neutral. They see culturally responsive teaching (let's call it, I don't know, CRT) as being race conscious, and they see being race conscious as itself being racist, or at the very least, divisive.

George Mason: The language now that we are hearing is that if we pay attention to the lived experience of people of color and marginalized people, and we call attention to it in this deliberate way, you're being divisive. And so in order to have a more peaceful community, to have a school system that everybody pulls together, we're not going to talk about race. So maybe I misstated that but that's the perception I have about what is happening in our schools right now.
Source: Wilshire Baptist Church.

It's ironic that it's considered divisive to acknowledge out loud that our society is divided by race, and to try to bridge that divide by talking about the elephant in the room is also considered divisive, but that's where we are.

George Mason: People of faith don't all think alike about matters of race, or sexuality, or gender, and so some of us are just not standing before the school board saying, 'Yes, this is our point of view, and we wanted to have it stated.' But maybe that's something that increasingly has to become part of the conversation in our community, that there's more than one faith perspective about these matters as well.
Source: Wilshire Baptist Church.

I can't let my comments about this panel discussion end without commenting about how impressed and pleased I was to hear this faith perspective stated clearly, in a church, by a pastor. No matter how offended you might be by LGBTQIA+ rights, you don't get to speak for all Christians. Even if you could (and again, you can't), you don't get to impose your religious faith tradition on everyone else in a secular public school system.

George Mason: Can you talk a little bit about this matter of how you help your your students understand American history in a way that doesn't lead them to hate America or to feel ashamed of their national identity, but is a fairer and fuller rendering of American history?

Casey Boland: First thing I can tell you is that if you actually talk to teenagers, they don't feel guilty. They're mad that we haven't taught them these things...You don't want to be the parents, who your kid going off to college is now looking at a college textbook and saying, why don't I have any idea what this is?

Powerfully put. So here's the deal. I'm a seventy year old white guy. I consider myself fairly knowledgeable about history. And I had to Google "Phyllis Wheatley." How did I not have any idea who this amazing woman was? I'm mad.

Case Boland: They have phones. They look up all of this stuff. I have kids who walk into my class every single day and say, 'What are we gonna learn about this?' I'm like, well, give me your phone. Let me learn about it. And then we talk about it. We need to catch up to what they know, and what they know they don't know. And so I'm glad we're finally catching up. We're finally getting there.

I'm reminded of a story from an American hired to teach English to university students in China. He said students would come up to him and try to get him to express his opinions about the Tiananmen Square Massacre, knowing that the subject is under a gag order in Chinese schools and public forums. He knew what they were doing. The students knew that he knew. The path American conservatives are going down, trying to suppress the teaching of unpleasant facts about American history, is the same path trod by the Chinese Communist Party. Facts have a way of leaking through any firewall. And when they do, they create a credibility gap that's impossible to close.

Jeannie Stone: Empathy is a really good thing to instill in kids. I've never had cancer but I can feel and have empathy for those who have. I want to be there with them and help them through it...There's been this confusion about empathy with what people that maybe in a different culture, in a different time, maybe went through.
Source: Wilshire Baptist Church.

Great analogy. Great literature inspires empathy. Are we to ban from our libraries all literature that inspires empathy for characters of another skin color, another national origin, another religion, another sexual orientation? Are we to ban the teaching of the history of such people? I hope not. But I fear that some people today would find such literature and history lessons divisive and, feeling no empathy, wish to ban it.

On the way forward:

George Mason: People are concerned about where we are right now in public education. What is on your checklist for them? What marching orders would you say? If I could send you out of here and be an army of people to help address this matter in a healthy way for our society? What would you say?

Casey Boland: There's a very small number of people who because they listen to other people, they're very truthfully afraid...I do feel very badly for people like that. If you were talking to someone like that, try to get them to articulate what their fears are. What is the worst thing that you think is gonna happen? And then go from there.

Jeannie Stone: If we do not turn the narrative back to supporting our teachers, if we call them pedophiles, if we say that people are intentionally choosing pornography to damage kids, those kinds of statements used as weapons are doing damage to our public education system. And so my ask of you would be to not allow that to happen, to support teachers, to believe in teachers, to let them know that they are so valuable and so important, changing lives every day. Be an advocate for public education. You're a product of it. Be an advocate. And stand up for your schools.

Charlie Johnson: Have some kind of tangible way to support teachers. Have a Teacher Appreciation Event in your congregation, your tennis circle or whatever, your beer-drinking buddies, take up an extra, you know, $10 and go provide lunch to the school tomorrow."

All good advice. Teachers are on the front lines of the battle to preserve public education. Do something concrete for a teacher. Do something personal. Tell a teacher you appreciate their service. Demonstrate that with some concrete action. Then repeat. Forever.

OK, that's more than enough of my commentary. You can probably watch the discussion itself in less time than you can read my opinions about it. So watch it instead. I assure you what they said is worth it.