Short-Term Rentals Are Getting Regulated, a Little 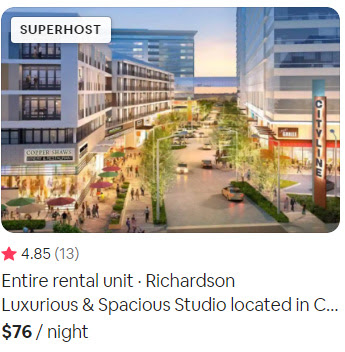 Complaints about Airbnb, Vrbo, etc., aren't new. On Monday, the Richardson City Council reviewed options for regulating short-term rental properties in Richardson. Why did it take so long? The wheels of government turn slowly, but the wheels are turning. That might not result in the strong actions some might hope for or expect.

Bob Dubey said he's received "feedback and input" on the subject. He didn't say what that feedback and input was. Maybe he thought it was self-evident, that his constituents simply want short-term rentals banned from their neighborhoods altogether. Janet DuPuy said, "Honestly, I don't want one right next to me, and I don't think anyone in here does."

The City's attorney, Pete Smith, outlined the legal context for the council's consideration. First bullet: "City may not prohibit or ban short term rentals." Courts won't allow cities to take away a property owner's right to lease his property just because it's unpopular with neighbors.

Everyone wanting that is going to be disappointed. Even though short-term rentals can't be prohibited, they can be regulated. Courts will allow a regulation that furthers a "compelling government interest" and is "narrowly tailored to achieve that interest."

I expected the City Council's deliberations to start with the question, what compelling government interest does Richardson have regarding short-term rentals? That question was never asked or answered. Instead, council members worked bottom up, suggesting regulations seemingly at random.

Bob Dubey asked if the City can require homeowners to notify the City when they agree to lease their property. Joe Corcoran asked if the minimum rental period can be made 48 hours instead of 24 hours. Ken Hutchenrider asked if homeowners could be required to carry a rider on their homeowner's insurance to cover damage by renters. These ideas and others were shot down for various reasons (e.g., high cost to the City to administer, or too restrictive to a legal practice without preventing the noise/parking/trash problems that most people associate with short-term rentals).

The City of Richardson already has ordinances about noise, parking, and trash/litter that can be brought to bear on short-term rental problems. No new ordinances are needed, only better enforcement of existing ordinances. "Between code enforcement and police department enforcement, most of everything ... can have action taken," Mayor Paul Voelker put it.

The City Council slowly narrowed in on what's missing in the current process that would address those underlying real concerns. That's an information requirement so that the tenants occupying a short-term rental are aware of the noise/parking/trash ordinances. Neighbors know those rules from living in the City, but visitors probably don't.

Expect City Staff to return with a suggested ordinance requiring a homeowner wanting to use his property for short-term rentals to register with the City, at which time the homeowner will be informed of a new requirement to post notice inside their home with the relevant City ordinances, much like hotels post emergency evacuation procedures inside hotel rooms. The registration would require the name of the homeowner as well as a local contact (e.g., a property manager) who the City Code inspectors or Richardson Police would benefit from knowing if called to a residence in response to an emergency or a complaint.

That's not much, but it's not nothing. Will that end complaints? Maybe not all of them, but it could help around the edges. At least it would make it harder for people renting a house for a night or weekend to be unaware of what ordinances they are required to follow. That itself should make it easier for the persons called to enforce the ordinances to get compliance. That might be enough in most cases. We'll see.

The Richardson city attorney Pete Smith pointed out that the law surrounding STR is developing. In Draper v City of Arlington in 2021 the Second Court of Appeals upheld the District Court’s denial of STR owners’ request to enjoin enforcement of Arlington’s STR ordinance which limits STRs to the City Entertainment District and certain other medium and high-density zoning districts. On January 28, 2022, the Texas Supreme Court refused to review that decision to deny a temporary injunction. The case now returns to the trial court to be heard on the merits. It isn't settled law...yet.

A point of perspective - if you live in an area with an actual mandatory HOA, and if it has stipulations in the bylaws regarding short term rentals, then they can be regulated. We had a situation in my neighborhood. We had to hire an attorney - good guy, only represents HOAs, not residents - and were able to force one individual from using his home as an air bnb. Our rules specifically state no rentals of rooms, houses may be leased to single families for not less than 6 months. And I was one of the people to talk with Councilman Dubey. At that time there was absolutely nothing the city could or would do.

Gary Beach, good point. The City Council discussed the difference between what mandatory HOAs could write into bylaws and property deeds and what voluntary neighborhood associations cannot do. Even here, the law is still being developed.