The City of Richardson's City Council elections are here. The Richardson ISD school board elections are here. The RISD is asking voters for approval on an important bond package as well, the first since 2016. I've watched some forums. I've read the questionnaires. Now it's time to decide how to vote. That's what I'm here for. Early voting begins Monday, April 19. Election Day is May 1. Here is all you need to know.

Only two of seven positions on the Richardson City Council have contested elections this year. I find this distressing, but I am pleased to see the two contested races have candidates that I can wholeheartedly endorse.

I endorse Joe Corcoran. This is an easy recommendation. Joe Corcoran grew up and lives in Richardson. He has the educational background for serving on City Council (Masters and MBA in Business Administration). He has experience with non-profit organizations, having been recognized as an Emerging Leader in Philanthropy by the Communities Foundation of Texas. His experience in the private sector, auditing corporate processes at both a startup and at a Fortune 500 company, gives him the skills needed to critically examine the City's business. His ability to ask tough questions will be a welcome addition to City Council meetings.

I endorse Arefin Shamsul. He's an immigrant from Bangladesh who has lived in America for 29 years. He earned a Masters degree in Civil Engineering. He owns a successful small business working on municipal infrastructure. His is an American success story. He has all the volunteer civic experience (Zoning Board, Building and Standard Commission, Leadership Richardson, Citizens Police Academy) that qualifies him for the next step, serving on City Council. It's sometimes said that the US government is an insurance company with an army. If that's true, city government is an infrastructure company with a police department. Arefin Shamsul's experience with municipal infrastructure and volunteer community service makes him well suited to address Richardson's perennial infrastructure challenges.

I endorse Vicky Suárez. She has a Masters degree in Music Education and is a music teacher in Plano ISD. She is a longtime parent of RISD schoolchildren, and along with that, a longtime volunteer with PTA, band boosters and choir boosters. She also has previously taught in the RISD. As a teacher and mother, she champions the cause of the district providing day care for district employees. This could be a benefit that would go a long way to retaining good teachers, which everyone identifies as a key ingredient for improving student outcomes. As the daughter of a Mexican immigrant, Vicky Suárez can be a bridge to an important community in RISD that has historically underachieved. Vicky Suárez is positioned to provide a unique voice and skill set to the RISD Board of Trustees.

I endorse Amanda Clair. She has three young children, two already in RISD schools and a pre-schooler. She's active in her children's school PTA, serving as first VP. She also serves as a volunteer at the district level. She is a subcommittee chair on the Racial Equity committee. She's a former teacher and director of English Language Learner programming. Currently, she is an academic director for a national education consultancy firm. All that gives her the personal and professional experience to be an asset to the RISD Board of Trustees. Her assessment of RISD performance is that we are not meeting our promises to all students regarding reading performance.

School Bonds: Infrastructure (Prop A) and Technology (Prop B): YES

I recommend a "YES" vote on both propositions. The Steering Committee that crafted this bond package was made up of 50 diverse stakeholders who spent countless hours reviewing the district's needs and its financial ability to meet those needs. One can always quibble with the details, including how the Committee was selected and run, but the voters will have the final say. This voter will be voting "YES." The need to increase capacity for pre-kindergarten education, addressed in part by moving sixth graders from elementary schools to middle schools, places construction demands on RISD. That, along with the maintenance demands on our aging RISD schools, makes this bond package essential spending. The much smaller technology component shares a similar story. Technology ages faster than buildings. Enrollment growth requires device and equipment growth. 2020's COVID-19 pandemic showed the difficulties schools faced trying to do remote learning. As much as some might like a return to students writing on personal slate boards with chalk, technology is not going away. The good news is that, thanks in part to the continuing historic low borrowing rates, the two propositions, while large, will not require an increase in the district's property tax rate (despite the misleading language required by the State of Texas). The chart below shows how truly extraordinary the financial situation is that we are living in. Because of low interest rates and a low inflation rate, the cost of borrowing is near zero (or even negative). The question we ask shouldn't be are we adding too much debt, but are we investing in worthy projects? The answer is "YES." So vote "YES." 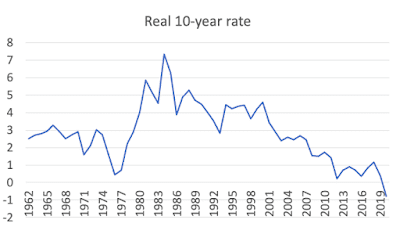 Update: Another graph that should be kept in mind is a graph of what it costs the federal government to service its ballooning debt. Debt service is lower than during the Reagan administration. That debt service today is low because of those near-zero real interest rates. Similar effects are at work at the local level.