The Voelker Doctrine in a Nutshell 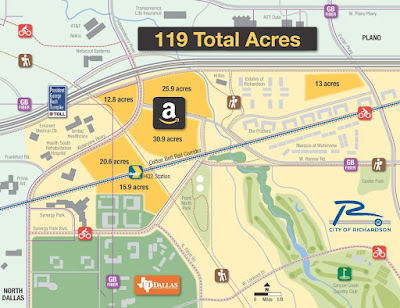 This week, the Richardson City Council rejected a proposal for a private student housing project north of UT-Dallas. I summarized the move as a message to students: "DROP DEAD." But that was unfair (really, not really). Mayor Paul Voelker expressed the thinking behind the rejection as more of a nod to a greater good. "My vision for the highest and best use are...technology-based, international companies that want to be right next door to a tier one research university." In his telling, it's not that he's against students or student housing, it's that he's for something he considers to be greater. I called that the Voelker Doctrine. Now I've found a six-word slogan that captures the doctrine in a nutshell. Read on.

If I didn't fully appreciate just how firm the grasp of the Voelker Doctrine was on the Mayor's thinking, and hence, on Richardson's own goals and strategies, that's on me. Voelker has been pursuing it openly for years.

Three years ago, when half the nation was going gaga for Amazon HQ2 (Amazon's "second headquarters") the City of Richardson made its own pitch. It's described in this article in The Dallas Morning News in February, 2018.

"We're one of few cities in the nation that have the right pieces in place to chase one of the world's largest mega-deals," Voelker said during his State of the City address on Wednesday at Richardson's Eisemann Center. "We have the building blocks in place to make HQ2 or anything like it happen here."
Source: Dallas Morning News.

The City of Richardson offered tax breaks. The City's pitch said Plano ISD would offer tax breaks, too. Biggest of all, the City's pitch said UT-Dallas would make available over 100 acres on the north side of campus for HQ2. If some of the remaining greenfield properties nearby like the proposed student housing land ended up in the Amazon's hands as well, so much the better. None of that happened, but keeping vacant properties vacant for future mega-deals seems to be part of the strategy for the Voelker Doctrine.

Earlier, I didn't have a pithy phrase that captured what the Voelker Doctrine was. I needed a slogan like "Great Richardson" maybe, but that sounds better suited for a shopping promotion. I thought of "Richardson Uber Alles," which certainly gets the size of the ambition right, but 20th Century history pretty much ruined that slogan forever. Then I came across that quote from Voelker's own State of the City address. Perfect, I thought. In a nutshell, the Voelker Doctrine: "Chasing the World's Largest Mega-Deals". In that chase, you really don't want to be a student in search of housing.

Wow. And people were worried about extra student traffic. Imagine an Amazon headquarters just off the neighborhood. Or any other mega corp.

I think it's a serious, possibly disqualifying blind spot. No one, and I mean no one, wants to build Class A office space in a sea of vacant Class B office space. They tried to get anyone interested in that location for a decade. It might have been able to go as a hotel but there are two new ones there now already.

If nothing was able to be built during arguably the longest bull market in history, why would we expect it to be done now when we see something like only 1/2 of the pre-COVID office demand coming back? Everyone that's building is going to Plano/Frisco. There's no draw for that location.