"Good tactics can save even the worst strategy.
Bad tactics will destroy even the best strategy."
— George S. Patton 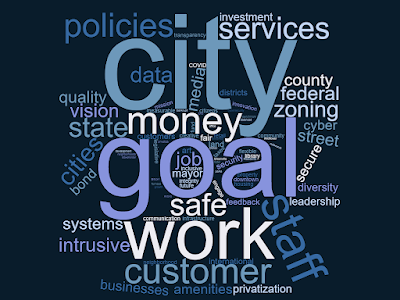 The Richardson City Council met for three nights to set their goals, strategies, and tactics for the current two-year term. They didn't finish. Their goals were refined enough for the facilitator to polish them and publish them. Their strategies were in rougher shape. The facilitator will be challenged to merge and prune and wordsmith them to capture the intent of the Council. 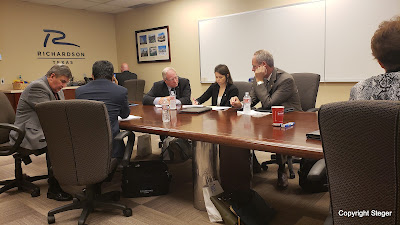 Their tactics, on the other hand, not only weren't completed, the Council members disagreed on even the need for the Council to produce any tactics. When anyone put forward anything specific and measurable, it was usually dismissed as being a tactic. Also, Steger's rule of goal setting was at work: the more controversial a proposal is, the more likely it will be deemed to be a tactic. Tactics are set aside for someone else to deal with later.

Late in the meeting, the facilitator suggested he had enough information on goals and strategies, and proposed the Council spend fifteen minutes in small groups generating a list of what they think the relevant tactics are. He acknowledged that "as you define your role, tactics are not really part of that, right. But there's also the desire to get stuff on the radar, right?" (I missed the first meeting, not catching its secret nature until it was too late, but I'd like to have heard who defined the Council's role for them. Having video to review would have been valuable.)

Ken Hutchenrider thought tactics were getting short shrift. He proposed, "I feel like we ought to call a timeout, go back, work on them individually and come back at one more meeting."

Mayor Paul Voelker pushed back, saying the role of the Council is not to identify tactics for the City Manager to take and execute. He argued, "The City Council works like a board of directors. Our job is not to tell at a tactical level Dan and his organization what to do, when to do it, and why to do it."

Jennifer Justice pushed back on the Mayor, saying, "We've come up with some strategies tonight that were actually tactics that I think we all agree are all incredibly important. And I think there will be more of those...I agree with Ken."

The Mayor didn't budge. "When I joined this Council, the Council before had 176 tactics when they came into the meeting. I never want to see that again." I couldn't speak at the meeting, but they can't keep me from speaking here: the problem was not the 176 tactics. The problem was the Council dynamics being unable to prioritize and cull those 176 tactics down to a manageable dozen or so that they could reach consensus on. That's a failure of leadership. Keeping Council members from proposing and prioritizing tactics isn't a solution; it only hides the problem.

But the Mayor's pushback worked. Hutchenrider surrendered the initiative. "So let me try something different. Do we then say to Dan, you've been with us this entire time, you've heard everything. What if you come back to us with a list of tactics?" Justice, abandoned, didn't stand her ground. The Mayor faced no other challenges.

That's where things were left. I don't expect the Council to generate tactics. The Mayor wrapped up the discussion on tactics telling the others to be right quick about it. "Pick one or two. If you can have a favorite child?" Different Council members then mentioned different things, but I didn't get the impression that any of them had prepared a list to use to hammer home their priorities. The Mayor, on the other hand, did seem to have anticipated this. He said, "I want, at a tactical level, staff to start the process of comprehensive plan review." Later he added one. "Staff needs to take a serious look at short term rentals." That's a neat case of the Mayor having it both ways.

Janet DePuy indicated she was on Team Voelker. "Airbnb was one of my things. And I've already talked to Dan about it."

The Mayor just put on a master class in controlling the Council's agenda. He made sure that the role of coming up with tactics was left in the hands of the City Manager. But he made sure everyone knew his own tactical priorities. The Mayor is no doubt comfortable that he can work with the City Manager to decide all the other tactics the City staff will work on during the next two years. As for the rest of the Council, good luck. The Mayor: "Going, going, gone. Again, in your monthly meetings with Dan, when they come back with an example list of tactics they're going to work on based on these goals and strategies, we can always say, hold it." Veto power is strong, but it's not as effective as the ability to create. The Council's power of creation is strongest when the Council are all in the same room setting the goals, strategies, and tactics. The Council members have little leverage in one-on-one meetings in the City Manager's office. That's a divide-and-conquer strategy, played expertly by the Mayor. It turns out these goal setting meetings, despite their secretive nature, aren't where the direction of the City is really set. That happens in the real chamber of secrets, the City Manager's office, during the one-on-one meetings between the City Manager and the Mayor. The rest of the City Council, either through inexperience or deference, let the Mayor get away with it.

I'll post again when the City Council publishes its 2021-2023 Goals. I'll score their work against my own wishlist and against the various tactics that somehow made it onto the whiteboard when brainstorming goals. I agree with Council member Justice. Some of those are "incredibly important."