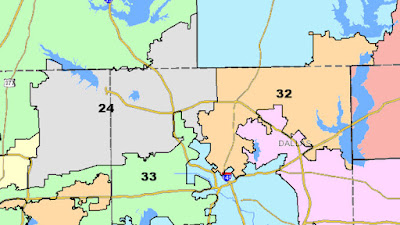 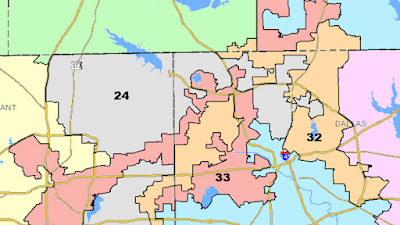 In the 2020 maps, all of Richardson was in Congressional District 32, represented by Colin Allred. In 2022, Richardson will be split in half. The eastern half will still be in District 32, but the orphaned west-central part of Richardson is being sent to live with strangers in the West. Texas District 24 stretches all the way to IH-35. And by IH-35, I don't mean IH-35E, the freeway from Denton to downtown Dallas. I mean IH-35W, the freeway from Denton to Fort Worth. The GOP leaders in Austin, when drawing a revised TX-24, sent it snaking east from Fort Worth, up and down and up again, this way and that, dividing communities of color as it went, eventually petering out at US-75 in Richardson, between Belt Line Rd and Arapaho Rd. The map looks like a cancer has eaten away District 32 in Dallas County, as if the GOP leadership in Austin wanted to crack the vote in hopes of shoring up TX-24's Republican representative. It will probably work. Joe Biden carried TX-24 by five points in 2020, but Donald Trump would have carried the new TX-24 by double digits. That the map makes no geographical sense is not a concern of the GOP. Safe Republican districts are what matters.

Being split in two is maybe the lesser indignity foisted on Richardson with this map. TX-24 also happens to be represented by Beth Van Duyne. Cue the ominous music: Dun Dun Dunnn. Or should it be Dun Dun Duyne?

If you don't remember Beth Van Duyne, maybe you remember the Irving "clock boy", the 14-year-old Irving student who was arrested for bringing a disassembled digital clock to school. He made it as a science project. School official and police assumed it was a bomb scare. Oh yeah, I almost forgot, the boy was Muslim. Instead of apologizing, Irving Mayor Beth Van Duyne defended the arrest.

Mayor Van Duyne also attacked a faith-based tribunal offering nonbinding arbitration of civil disputes. Oh yeah, I almost forgot, the arbitration was faith-based and it was offered by Muslims to Muslims. Van Duyne charged, "Sharia Law Court was NOT approved or enacted by the City of Irving." It was a charge which benefited from the fact of being true, if irrelevant. Religious freedom protects Muslims as well as Christians. Similar religious tribunals exist within Christian and Jewish communities, none of which are "approved" or "enacted" by city governments. Van Duyne either did not know this or did not care to mention it as she stoked anti-Muslim hysteria in her community. "Her" community is a funny expression. With Richardson now being represented by Van Duyne, I guess we better get used to Richardson being considered "her" community as well.

I can't find any bright spots in this round of redistricting for Richardson (or for political moderates of any stripe in Texas).