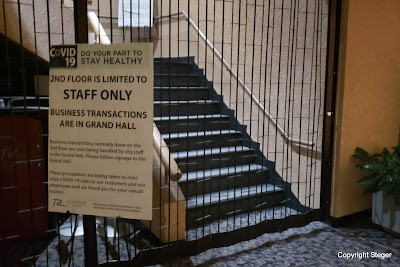 Founding Father James Madison once wrote that democracy without information was "but prologue to a farce or a tragedy," and he regarded the diffusion of knowledge as "the only guardian of true liberty." Texas law has long agreed the inherent right of Texans to govern themselves depends on their ability to observe how public officials are conducting the people’s business. That is why the Texas Open Meetings Act was enacted, to ensure that Texas government is transparent, open, and accountable to all Texans.
Source: State of Texas.

I'm not about to accuse the City of Richardson of violating the letter of the law. It's the City's attitude towards the spirit of the law that gives me heartburn.

This week, the City Council met for the third time to plan their goals for the current term. You'd think they would meet in Council Chambers, like every other Council meeting. Or in City Hall's Richardson Room, like every other council work session. You'd expect them to capture the meeting on video, like every other meeting or worksession. You'd be wrong. It's not an oversight. It's all deliberate. They can't be shamed into doing things in as "transparent, open, and accountable" way as possible. (I know; I've tried.)

That photo above shows where they met: behind a gate and a sign that warns "Staff Only," upstairs in a private conference room. [The gate was unlocked and opened just before the meeting. The sign wasn't removed.] What kept this legal is that the public was allowed to attend. Three members of the public did, which is how you are getting reports like this. Don't expect to get anything at all from the City, except the cut-and-dried results: a set of anodyne goals that could just as easily apply to North Richland Hills as to Richardson. (Pop quiz: How do you know North Richland Hills's Goals are not, in fact, Richardson's Goals? Answer: The first goal includes the word "neighborhoods.")

Does any of this matter? The City Council already approved a budget, so it's not like whatever they come up with is going to directly affect any spending. And I'm here to report that nothing nefarious happened in that upstairs chamber. It was mostly trying to come up with adjectives that won't offend anyone ("clear, understandable, and consistently applied policies"). Still, I like to think that it does matter anyway. The City Manager sat through the meeting, mostly silent like me (except I was *always* silent). He looked relaxed, but you hope his ears perked up as he listened intently to every stray thought. It was like watching farmers put their harvest through a sieve, but perversely saving the chaff and discarding the wheat. The chaff ends up baked into the Council's Statement of Goals. A few grains of wheat, if we're lucky, end up on the City Manager's to-do list.

In our next installment, we'll look for that wheat.