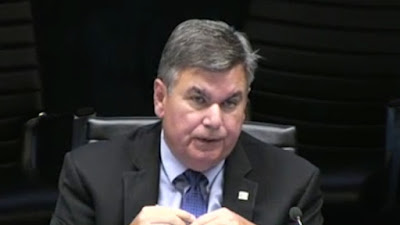 I've been preoccupied with a zoning case for student housing just north of UT-Dallas for almost a year. The case is finally dead (I think). For the second time, the City Council denied the rezoning application. Each time I struggled to find a coherent reason why. As I said in December, 2020, "You might think if there's anywhere an apartment building just might get approved, it's on a property like that: on a freeway, near public transit and a large (and growing) university, and nowhere near a single family neighborhood. But the City Council said 'no.' " This year, I called a similar application for rezoning a "no-brainer." The City Council again said "no." What was I missing?

Before I get into that, let me state my understanding of the point of the rezoning hearing. Mainly, it's to determine whether the application is for a land use appropriate for its location. It's not even about whether the project is the best use of the land, only whether it's an appropriate use. The future land use plan should be used for guidance, but that plan says that it is flexible. At the prerogative of the City Council, proposals not in conformance with that future land use plan can still be approved if the City Council determines the use is appropriate.

Again, I saw this as a no-brainer because I believe student housing near a growing university and a commuter rail station to be an appropriate land use.

Much of the City Council's deliberation strayed far from that question.

Bob Dubey was concerned with whether the proposed apartments are "affordable." (The applicant does not use that unclear term. He expects lease rates to be competitive with Northside, which the City Council approved just seven years ago.) He also claimed that UT-Dallas's growth was in doctoral students and that it had a housing plan that it was implementing; in short, that the situation wasn't "dismal." (Well, OK, then. The UT-Dallas official saying the university had a "housing crisis" must have been wrong. The students on the 1,000-student-long wait list for university housing must be imagining the crisis) Dubey was also "hung up" with the fact that there's no guarantee the new project will be restricted to student housing. (Again, just like Northside has no guarantee, and it was approved.)

Janet DePuy was also concerned with public perception of the apartments as "affordable." (She didn't explain how rents comparable to Northside make this project somehow not an appropriate land use.) DePuy wasn't concerned with office vacancies. She put her faith in Richardson's future growth. According to her, the landowner knew the zoning on the land when he bought it (Dubey used this argument, too) and the fact that a pandemic cratered the office market is not a valid reason for him to seek rezoning. She also questioned the need. She is confident that UT-Dallas has enough land to accommodate housing for 35,000 students and staff. (She ignored the fact that UT-Dallas's own target is to house only 25% of those students, and they can't even reach that goal.) DePuy was also concerned with the plan to separately lease bedrooms in two-bedroom and four-bedroom units. She was concerned with the fear that a woman might be forced into cohabitation with a man. The applicant and his lawyer were unprepared for this question.

Ken Hutchenrider couldn't get past the matter of safety for females. He certainly wasn't satisfied with "expectations" of how the leasing policy and practices would get implemented. I'm not sure even if the applicant pulled out planned lease contracts for him to peruse would he be satisfied. Even the applicant's willingness to include in the leases whatever language the City Council wanted wasn't enough for Hutchenrider to let go. That's because, naturally, nothing will ever completely put a father's concern for his daughter's safety fully at ease. But this student housing project won't be breaking any new ground on Fair Housing Act laws, regulations, and leasing contracts. Other housing, on campus and off, in apartments and home rentals, have blazed this trail already. Such details are extraneous to the question at hand, which is whether student housing is an appropriate land use.

Jennifer Justice, Joe Corcoran, and Arefin Shamsul also asked some questions I thought were tangential to the question at hand, but they didn't let those questions lead them to vote "no" on the fundamental land use question, so I'll give them a pass.

That leaves Mayor Paul Voelker. Until he spoke, opposition arguments fell somewhere on the spectrum between unconvincing and embarrassing. Voelker presented the only intellectually sound argument for a "no" vote. Combined with comments that he has made at various City Council meetings during the last year, I finally can construct a coherent philosophy behind a "no" vote. Call it the Voelker Doctrine. Not that I agree with it, but at least I now understand and respect it.

Let me try to say how it came together in my head. During the budget workshops a few months ago, I was encouraged by Voelker asking City Manager Dan Johnson to begin planning an update to the City's Comprehensive Plan. I was encouraged because I was sure that an update would relax the restrictions on future land use north of UT-Dallas. It just seemed to be such a no-brainer to me. I thought sure the transit-oriented development zone would be enlarged, allowing for residential, retail, and entertainment in areas currently designated "regional employment." Student housing would be a natural fit. Or so I thought.

Then, during the rezoning hearing for one of the new drive-through restaurants near Plano Rd and Belt Line Rd, Voelker said (and I'm going from memory here) that he didn't think that area was ripe for rezoning. He suggested the next rezoning study area might be Coit Rd around Promenade. The land north of UT-Dallas didn't appear to be on the Mayor's radar screen. I should have suspected then that rezoning wasn't the slam dunk I'd thought it was, even if the Comprehensive Plan did get updated. But that didn't dawn on me yet.

That brings us to this week's rezoning hearing for that student housing project. The Mayor said several things that explained a lot about his attitude towards UT-Dallas and its students.

First, he said that only 3% of Richardson's land is undeveloped, making any such land "very, very valuable" and reserved for "highest and best use." That goes farther than the guidance given to the CPC that they should concern themselves with "appropriate land use," not necessarily "highest and best use," but it tells me where the Mayor is coming from.

Second, he said, "My vision for the highest and best use are...technology-based, international companies that want to be right next door to a tier one research university." That's that, then. Even if the Comprehensive Plan were reviewed and updated, I'd expect the Mayor to want to keep the future land use north of UT-Dallas the same, namely regional employment. Transit-oriented development loses out to his vision of a partnership between technology companies and the university.

Third, what's the solution for the student housing crunch? The Mayor has that covered, too. "When Silver Line is done, you'll be one stop from CityLine and one stop from Addison Circle." You can live in the hundreds of apartments in either place and be just 10 minutes from UT-Dallas by rail.

What's the message the Mayor wants the landowner, the adjacent neighborhoods, and the students to take away from all this? Have patience.

I think his optimism is unwarranted. He makes an unconvincing argument, but it is not an embarrassment. It relies too much on hope, but perhaps he thinks my argument is based too much on fear. I do fear that his approach does nothing to address a real housing shortage that will get worse, not better, the longer the City ignores it. All you need is patience for me to prove it.

Hi Mark,
Reading your missive, I must say I had a very similar thought about student housing when the "Haven at Waterview" was rejected but the "Sherman Lofts" was approved. I guess students can live at Sherman and Centennial, ride DART to the Silver Line - when it is completed - and go to class. But living 1/2 mile from campus would be so much more convenient! Apparently there was a lot of debate on both sides but currently the "No's" hold sway.