What is a Drive-Thru Menu Board Worth? 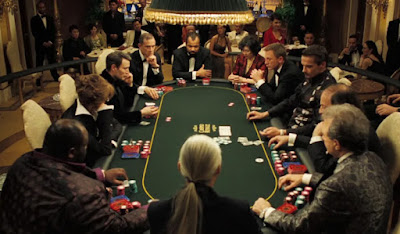 The poker game at the Horseshoe Saloon was getting interesting. On one side of the table were arrayed seven regulars. Across from them, with all eyes on him, was "Hot Chicken" Kirk. Although not a regular player, "Hot Chicken" played frequently enough that he knew each player's tics and tells. Would this be the game he used that knowledge for his own advantage?

"Hot Chicken" figured three of the regulars wouldn't put up a fight. "Boss Man Paul," "Wannabe Janet," and "Coach Bob" never met a business bet they didn't like. "Boss Man" explained it as being a "business friendly council." "Hot Chicken" was pretty sure he could separate them all from their lunch money without giving up too much himself.

But "Hot Chicken" needed to win over at least four players. Where would he get the fourth? "Candy Striper" Ken and the three "newbies" weren't promising. In the poker game they all played in July, those four sent "Hot Chicken" home without the pot. Would they do it again?

But "Hot Chicken" came to this game better prepared than the last game in July. His ace up his sleeve was beer. It worked beautifully. He had all the other players gaga over not just the beautiful renderings of his Biergarten, but animation with "kitschy music" (not my words). There was a tap bar, an entertainment stage, a food truck, cornhole games, cabanas, and a dense canopy of foliage. What's not to fall in love with? "Hot Chicken" had everyone's attention drawn away from the elephant in the room, that drive-thru restaurant in the flop that proved to be "Hot Chicken's" undoing in the past.

Would the Biergarten do the trick this time? Could "Hot Chicken" be trusted? He made his best attempt at sincerity. "I've read the blog. This is not any attempt to snooker anybody or anything like that." (Whoever could he mean?) "Candy Striper" called "Hot Chicken's" bluff, demanding some convincing assurance that, once the drive-thru restaurant was approved, that the Biergarten would actually get built. "Hot Chicken" hemmed and hawed. Awkward silence was followed by a word salad of reasons that it was in his interest to build. It reached the point where I was beginning to think that maybe he was indeed trying to snooker us. "Hot Chicken" retreated to think things through. When the bet came back around to him, it was like watching a poker player in an old movie slip the Rolex watch off his wrist and slide it across the table to the pot. It was the equivalent of him going all in. "Here's what I think we can do. We can agree to if we don't start construction within 24 months, we would lose the menu board."

That gives us the answer to my original question. What is a drive-thru menu board worth? Either everything or nothing. The menu board isn't the drive-thru itself. "Hot Chicken" could still build with a pickup-only drive-thru. So the menu board itself can't be worth that much if it's the first thing "Hot Chicken" is willing to throw overboard. On the other hand, it must be worth a lot if the other players at the table think that holding the menu board hostage will provide the assurance that "Candy Striper" demanded for his support. In the end, "Hot Chicken" won over his fourth player. And fifth, sixth, and seventh. They all folded. "Congratulations," said "Boss Man."

And that's how poker goes. The pot gets bigger and bigger until each player thinks its size and the odds of his hand winning it make for a fair bet. Or until one player bluffs everyone else into folding. Each hand, someone will win and someone will lose. But over enough hands, if everyone goes home a little bit happy and a little bit disappointed, it makes for a good game of poker. The game Monday night at the Horseshoe Saloon was that kind of game.

This story is a work of fiction. Any similarity to actual persons, living or dead, or actual events, is purely coincidental. I would be shocked, shocked to find that gambling goes on in the Horseshoe.

at 11:00 AM
Email ThisBlogThis!Share to TwitterShare to FacebookShare to Pinterest
Labels: LocalPolitics