Redistricting Scatters Richardson to the Winds 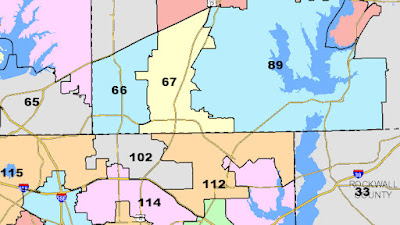 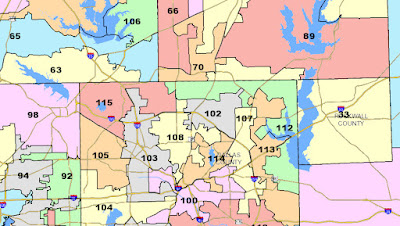 What do Richardson and Rockwall have in common? They are both represented by Justin Holland in redrawn Texas House District 33. He, along with Angie Chen Button and Ana-Maria Ramos, will represent Richardson in the new redistricting maps passed by the Texas legislature. (Correction: Plano's Scott Sanford will also represent the tiny northwest corner of Richardson, at least until the 2022 election.) Say goodbye to Jeff Leach, whose Texas House District 67 has been redrawn and shifted far to the northeast in Collin County. 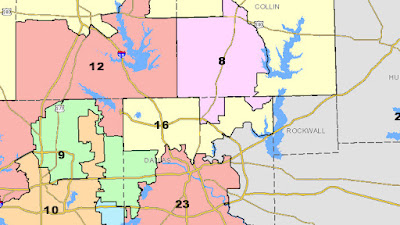 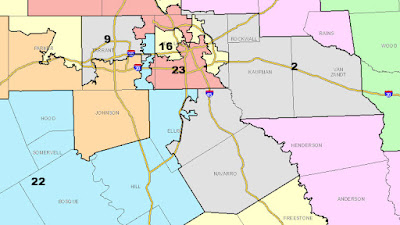 Say goodbye to Angela Paxton, whose Senate District 8 exchanged Richardson for Greenville to shore up the conservative vote for Paxton. Richardson will have a new district with a new face in 2022. Make that two new districts and two new faces.

What do Richardson and Irving and Balch Springs all have in common? Despite one city being on the northern border of Dallas County (Richardson), one on the western border (Irving), and one on the southeastern border (Balch Springs), they are all part of the new salamander-like Texas Senate District 16. The current District 16, which does not contain Richardson, is represented by Nathan Johnson. That's one new face. (Correction: The original post said Nathan Johnson announced his retirement. He did not.)

What do Richardson and Corsicana have in common? They are both represented in the new Texas Senate by Bob Hall (Texas Senate District 2). It's a big chunk of east Texas with a slim finger reaching out to poke the north half of Richardson. That's a second new face. And it's Bob Hall. It's like someone in the Austin GOP leadership really hates Richardson.

How did this happen?

Redistricting occurs every ten years, triggered by population changes enumerated in the decennial census. There are three main drivers of the map drawing (at least how Texas does redistricting; some other states have non-partisan methods).

Let's look more closely at the effect of redistricting on Richardson, first in the House, then in the Senate.

Each Texas House district has a population of about 170,000 people. Richardson itself has 120,000 people, meaning one representative could represent all of Richardson (and a bit of neighboring cities). But with the 2020 map, Richardson was divided and constituted just a small part of each of three districts. The good news is that each of these districts is compact. Richardson shares District 102 with north Dallas, District 112 with Garland, District 67 with Plano. There's enough commonality that Ana-Maria Ramos, Angie Chen Button and Jeff Leach can be expected to be very familiar with Richardson's careabouts. Having three can be good (three people looking out for Richardson in Austin, not just one). But it can be bad if the three people have other priorities. That brings us to the new maps.

On the 2022 map, Richardson will be divided into four districts. (The original post said three.) But only one district resembles any of the old compact districts.

Each Texas Senate district has a population of about 940,000 people. Richardson is going to be a minority interest no matter how the maps are redrawn. Currently, Richardson is wholly contained in the big District 8, which is mostly southwestern Collin County, but has a bump on its southern border reaching down to swallow up Richardson. District 8 is represented by Angela Paxton. Given our population, getting 12% of a state senator's attention is probably the most we could expect.

District 8 and Angela Paxton are being redistricted away from Richardson altogether. Looking forward, Richardson is getting the worst of all possible outcomes. It's now going to be split in two, so we'll get even less attention from each of two state senators. The identity of one of those senators is why I call it the worst of all possible outcomes.

Enter your address in the "Texas Tribune's" customized map page to see how the new districts affect your own home.

You forgot that a small part of Richardson will also be located in State House District 70. Put the following address into the Texas Tribune link:

Joe Corcoran and Mauri Long, thank you both for your corrections. The post has been updated. I am always grateful for sharp-eyed and helpful readers. ;-)