This Isn't About Her 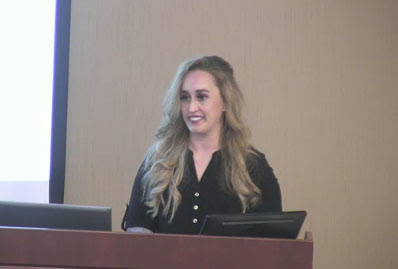 First course, something light to whet your appetite...

In my ramble yesterday about last Thursday's Richardson City Council meeting, I made a lot of trial analogies. This despite my firm intention of hammering home the point that the council meeting was in no way a legal proceeding. But one reader said I missed one analogy by not noting the symbolism of the name of one person in our little drama, the most effective questioner, Councilmember "Justice." He was right. But I defer to John Barth, who included some advice in his novel, "The Floating Opera," that I've always thought was worth following.

At the curb in front of a large funeral parlor a sleek black hearse was parked...As I approached, a fat black pussycat scarred with experience and heavy with imminent kittens, trotted wearily out of a hydrangea bush beside the undertaker's porch into the sun, and for no discernible reason, curled plumply in the middle of the sidewalk and closed her eyes. Just then the door opened, and the pallbearers came out bringing the casket. Their path was diverted, but not greatly, by the pregnant cat. Some of the pallbearers smiled, and an employee of the funeral home nudged the cat aside with his toe...I smiled and walked on. Nature, coincidence, can often be a heavy-handed symbolizer. She seems at times fairly to club one over the head with significance such as this clumsy "life-in-the-face-of-death" scenario, so obvious even in its details that it was embarrassing...So reader, should you ever find yourself writing about the world, take care not to nibble at the many tempting symbols she sets squarely in your path...Develop, if you can, the technique of the pallbearers and myself: smile, to be sure, but walk on and say nothing, as though you hadn't noticed.
Source: The Floating Opera.

So I listened to councilmember Justice ask her questions, smiled, and moved on. Now is your appetite ready for the heavy main course I've prepared for you?

In a serious response, another reader who wants to remain anonymous said, "The council deserves kudos for displaying great restraint in not ripping the elephant (not) in the room to shreds." My correspondent then proceeded to rip Officer Walker to shreds herself. Her criticism focuses on Walker declining to be interviewed in the investigation, Walker not lining up fellow officers to join her public complaint, and Walker not being "armed with evidence" when she filed her complaint with the City. She says Walker looks like a disgruntled employee and worse, a coward.

My correspondent makes some good points and some outrageously bad ones. A "coward"? That doesn't deserve the dignity of a response. But I'm not going to defend Walker. She is capable of doing that herself, if and when she gets to tell her story to an independent and impartial investigator. Instead, I want to say that in my blog posts, I didn't spend much time defending Walker BECAUSE SHE WASN'T ON TRIAL.

As Mayor Voelker said, "At the heart of this is how does a city monitor the performance and measure the productivity of officers?"

As far as I'm concerned, Walker could have been fictitious and an investigation would still have been needed. Even if she didn't exist, most of what I wrote would still have applied. I didn't depend on what Walker said to form my opinions. I relied on the City's own hired investigator Wayne Olson's own report.

I understand that reasonable people might come to a different conclusion, but I consider what Olson reported to be damning even with no testimony from Walker. What he wrote came from interviewing just two patrol officers, two sergeants, a detective and two police chiefs. And having access to some undetermined number of written performance evaluations. He felt he learned enough from that to acquit the department of running an illegal ticket quota system. I felt I learned enough from that to reach the opposite conclusion. That is what is worth a lot more discussion than the City Council gave it Thursday evening, not Walker's methods in bringing this to our attention.