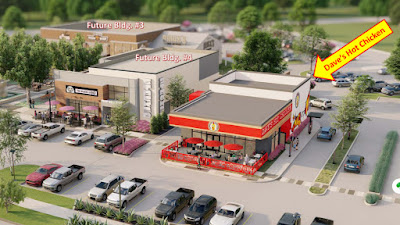 I was never a fan of what I called Restaurant Row. Even today, there still isn't much "Park" in "Restaurant Park." Looking back on comments from the time it was approved by the City Council, one public speaker presciently asked what the City's commitment to the original West Spring Valley Planned Development would be going forward. It's still an open question, but with Monday's vote, there's a glimmer of hope again. What was approved for Restaurant Park seven years ago was already a major modification to the PD vision (the first lowering of the bar). Then, in December, 2020, another major modification was made by approving a restaurant with pre-order/pre-paid drive through service (the second lowering of the bar). Now, six months later, the City was asked to relax the zoning yet again, this time to allow a conventional drive-through with menu board and onsite order and payment system for a Dave's Hot Chicken restaurant (the third lowering of the bar, or perhaps stated more accurately, the removal of the bar altogether). What's different between now and six months ago when the City Council first approved a somewhat restricted drive through, is that there are three new council members. They and a fourth who had conflicted feelings in December, rejected the proposed complete surrender of the original vision for this site. It was a welcome sight.

Elections have consequences, but maybe only incrementally. That was shown in the vote for another special use permit for a drive-through restaurant. This second one was for a Popeye's chicken restaurant on Belt Line Rd just east of Plano Rd. The council ended up approving that in a 5-2 vote, with only Justice and Corcoran voting no. So, Richardson will be getting another old-style, pad-site drive-through restaurant. Our new council's majority is still not reliably opposed to 1980s-style development. But it looks like we might have two votes for a vision of the future with a more adaptable, sustainable development form for Richardson. The residents of Richardson need to work to increase those numbers. Elections have consequences, if slowly sometimes.

You have a longer history of following Council meetings than I do, so I appreciate your analysis. My question: several of the Council members who voted for the Popeyes at Beltline & Plano Rd stated they were "big land rights" people who believe in competition (re 6 or 7 fast-food chicken restaurants within a mile or so of each other). Several of our new Council members asked if there's a plan to understand what further development is desirable in that part of Richardson and look for businesses that benefit the immediate community. What allowed Popeyes to get its special permit, while Dave's Hot Chicken lost out? Does the fact that we have a West Spring Valley Development Plan in place (however disregarded) explain the two votes?
pat. griffin

Pat Griffin, thanks for the feedback. You ask a good question. I can only speculate on an answer. The two cases are different pieces of land in different areas of Richardson with different histories. It's not altogether surprising that the Council might reach different decisions. But...three councilmembers voted to approve both, two voted to reject both, and two councilmembers voted for one and rejected the other. The most likely reason why Dave's Hot Chicken was rejected is because of the history of that site. It was on land purchased by the City of Richardson, which demolished the Continental Inn and then sold the land back to private developers. The land was the first part of the West Spring Valley Road Planned Development. The development guidelines were relaxed to allow Restaurant Park to be built and now are being asked to be relaxed again. The two councilmembers who split on the two cases might have decided enough is enough. As for Popeye's, that's in a long neglected area of Richardson which has no restrictive planned development zoning. The same two councilmembers who rejected Dave's Hot Chicken apparently thought that there was no zoning history in east Richardson to justify rejecting a drive through in that neighborhood.