Anything is Better Than Nothing in East Richardson 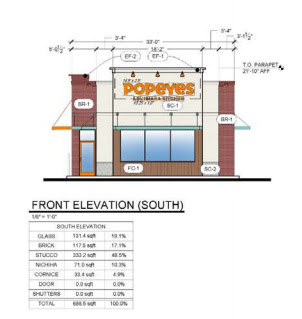 In a 5-2 vote, the Richardson City Council approved a permit for a drive-through Popeyes chicken restaurant on Belt Line Rd east of Plano Rd. The arguments presented by some council members in the majority exemplify what I consider a problem with the City's approach to east Richardson for decades.

Back when the other drive-through restaurants came in, the neighborhoods surrounding were very excited to have those establishments because they didn't have anything. That Sears parking lot was empty.
Source: Richardson City Council Member Janet DePuy.

Well d'oh. Beggars can't be choosers. So, yes, when a developer came along and dangled a Chipotle, a Jason's Deli, and just maybe even a Trader Joes, of course the neighbors were going to get excited. It's easy to excite beggars you know. By the way, there's still no sign of the latter two businesses. And with those brands as potential tenants, how many people are going to spend much time asking about the form of the development? Anything is better than nothing, right?

Good city leadership would have made sure that when the developers dangled popular brands in front of the neighborhoods, that there would already be a plan for the form that new development would take, a form that would be adaptable and sustainable, a form that would last. By the way, there's a vacant Quiznos a short distance from the proposed Popeyes site, a building built in the 1980s, that one neighborhood leader recently called for its demolition. Richardson Square Mall itself was demolished in 2007, except for Sears, whose own demise was nevertheless foreseeable at the time. That was just 30 years after it opened. For over a decade the City did nothing proactive to ensure redevelopment of this entire retail area in an adaptable, sustainable form. DePuy does the neighborhood no favors by voting for an out-dated development form just because the brands might be popular today with many in the too-long neglected neighborhood. Even that popularity is conjecture in the case of Popeyes. DePuy pointed out how many residents turned out in support of the rezoning for the restaurants across the street. There were hardly any who turned out Monday in support of the seventh chicken restaurant in the area.

If Mr. [Arefin] Shamsul wants to look at this, study this area further, then maybe we get the neighborhoods together, but I don't think we should penalize Popeye's Chicken at this time while we wait to figure out what we and the neighborhood wants to do with this area. So I'm more than happy to look at the area to see what we can do to make it better, but I also think that not every neighborhood can be walkable, not every restaurant needs to be a sitdown restaurant, we need to have that mix of options for our residents, so I'll be voting in favor of this."
Source: Richardson City Council Member Janet DePuy.

There's a lot to unpack there. First, the City has already penalized Popeyes and every other potential business and every property owner and neighborhood resident by spending the last fourteen years not figuring out what we want to do with that area. DePuy curtly dismissed Arefin's call for a study before approving the first thing to come along, especially a standalone, drive-through chicken fast food restaurant. Maybe I'm reading too much into it, but I got no impression that DePuy had any intention to follow up later to do anything "to look at the area to see what we can do make it better." In any case, DePuy's retort worked. Not only didn't Arefin reply, in the end he voted with DePuy to approve the drive-through chicken place.

Maybe Mayor Pro Tem DePuy is getting her attitude from serving alongside Mayor Paul Voelker for the last two years. Mayor Voelker left no doubt about his own attitude towards development standards in east Richardson:

It probably won't be a shock to anyone in the audience. I'm a land rights person. We're not starting a district planning effort. When I look at my comprehensive planning strategies and challenges, we will probably look at Arapaho Rd and Promenade as a district prior to considering this area, if at all.
Source: Richardson Mayor Paul Voelker.

So, if you live in east Richardson, know what you're up against on City Council. A history of neglect. Know that you're at the back of the line for any effort to change that. Know that the recent approvals of a Chipotle and a Jersey Mike's aren't part of a comprehensive plan for development and long-term sustainability of the area. Know they were the result of a combination of an opportunistic land developer and a City Council with other priorities. Know that five City Council incumbents will include in their campaign literature next election that they brought a Popeyes chicken restaurant to east Richardson. Because they know that beggars can't be choosers. And something is better than nothing.

Of course, no one argues that people shouldn't come to Restaurant Park by car. Corcoran easily rebutted this straw man argument: "People can still drive to the restaurant as well. Just because it doesn't have a drive-through doesn't mean you can't drive to the restaurant and get food to-go or walk in. That's just my one rebuttal to that." There was much else in Dubey's comments that deserved rebuttal (e.g., that the existing Park meets the residents' original vision and that conventional drive-throughs are what the Council asked the developer to bring to them). In any case, Corcoran showed that respectful disagreement can be a part of Council deliberations. More of that please. Much more.

Thanks Mark, as a 30 year resident of Mark Twain, you are correct. Speaking of Arapaho how about the concrete plant?...