Stop in the Name of the Law 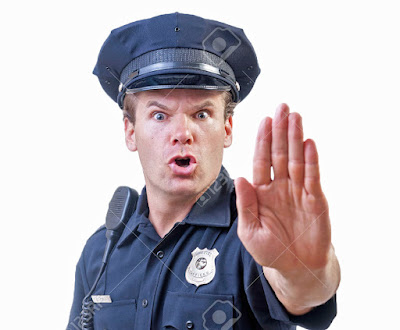 Much has been made of the plain meaning of the words "predetermined and specified number" of citations in determining whether the Richardson Police Department has a ticket quota system. Those words are from the state statute prohibiting cities from imposing ticket quotas on its police officers.

The City's investigator stated that the City does not have a ticket quota. He conducted only two interviews with patrol officers and reviewed an unspecified number of performance evaluations. A suspicious mind might wonder if he was afraid to turn over too many rocks for fear of what he might find. And he included no evidence from any of this. No interview transcripts. Not even a list of questions he asked. No evaluation reports.

Let's turn over just one of those rocks.

This is an excerpt of one Richardson patrol officer's performance review (highlighting is added). I don't know which officer's report it is, except that it's not Officer Walker's. I don't have the full report. I've redacted most of the numbers in the report to make it a little bit harder to identify which officer this report is for.

What I find to be clear and unambiguous in the evaluation is the statement "You need to maintain a 3 stop a day average over the course of each and every month." There are bad consequences. "If you do not meet this expectation each month, you will be put on a performance plan which may include discipline for dereliction of duty..."

This is hard to explain other than as a quota. A quota for stops, not citations, but undeniably a quota. Maybe this example is an outlier. Maybe department policy has changed since this report. Or maybe, it is what it is: evidence that the Richardson Police Department imposes a quota system on its patrol officers. Chief Tittle should admit it and vow to eliminate it. No quotas for arrests, for citations, for stops. No quotas.

It really begs to question exactly what is the relationship this law firm has with Richardson and other cities. It clearly is not to find fault, which they appear unable to do. They appear to be a PR shop from the report, more interested in damage control than real research. When will the city learn? The big question is who is responsible for all of this?

In the Jordan trial this last week, the last Staples report did not fly. There was a narrow scope and lack of subpoena power to be viable. Mr. Staples must love COR for the
increased revenues.

This “report” to the Council declaring there existed no ticket quotas reminds me of the last report that the then Council received: that Laura Maczka in no way violated the City’s ethics ordinance. I heard the comments from Council then congratulating the lawyer who performed that ‘“investigation”, assuring the citizens that the “process worked” and the citizenry should be relieved. I heard the same congratulations and laudatory comments addressed to the attorney and City staff from current Council members for the report than proved ticket quotas didn’t exist, and the report forwarded to the District Attorney.,
The Ethics investigation report was also forwarded to the DA.

Well, a guilty verdict was just declared in Federal Court for 10 of the twelve charges against Ms. Jordan (nee Maczka)
Will history be repeating itself?

Dave Lieber of DMN has the story now: "Richardson says police don’t have ticket quotas, but these emails sure make it look like they do".