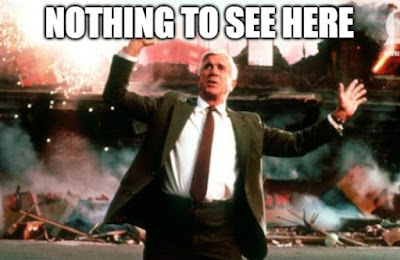 In just five minutes, the amount of time members of the public are given to speak during the public comment section of City Council meetings, a 13-year veteran of the Richardson Police, Kayla Walker, kicked off a storm in Richardson in April, charging supervisors in the department of illegally using quotas to evaluate and discipline officers. Thursday night, in a special called session of the Richardson City Council, the public learned the result of the City's investigation into the charge. Spoiler: the City found nothing illegal about its own police department's practices.

Let's rewind. At the time, I wrote that this is "an easy call for me on this one. Yes, for sure the City of Richardson ought to conduct a thorough and independent investigation."

By "thorough" I meant everyone in the department should be interviewed. All documents related to the case should be reviewed. Leads related to the accusations should be followed, regardless whether they directly impact the complainant herself.

By "independent" I meant an investigation by someone who is not paid by the City, neither an employee nor someone being paid by the City. You know, an investigation by someone like the Dallas County District Attorney or the Texas Rangers. It was the FBI investigation that resulted in bribery charges being eventually brought against our former mayor, after the "independent" investigator selected and paid by the City found nothing illegal. Yet the City has gone back to the same law firm to conduct this investigation. It's a law firm that brags about "Proudly Representing Public Entities Across Texas." Note the pride in "Representing" not "Investigating." One of its services is to "Provide a defense in employment-related litigation." As qualified as this law firm is in what they claim to do, this is not the kind of law firm that ought to inspire confidence in the public that we'll get a thorough investigation into potentially illegal activity by the City itself. At the very least, there's an appearance of a conflict of interest here. One could imagine that developing a reputation for tough investigations, for finding illegal behavior on the City's part, might put in jeopardy future business with city governments.

"It is difficult to get a man to understand something when his salary depends upon his not understanding it." — Upton Sinclair

Officer Walker said that "I strongly believe most of our front-line supervisors are being pressured to participate in this illegal quota system by command staff members above them." How high does this "quota" scheme go? It's hard to imagine that the Chief of Police Jimmy Spivey wasn't aware. (Coincidentally, he retired at the end of May.) In another controversial case, involving a Richardson police traffic stop that resulted in a federal civil rights lawsuit that's ongoing, The Dallas Morning News reported that Richardson City Manager Dan Johnson vouched for the city's police department, saying "he works closely with the police chief." If that's true, an outsider might presume that the City Manager himself might have been aware of this allegedly illegal "ticket quota system." That could implicate the City Manager. So why didn't he recuse himself from appointing the investigators? Why didn't he turn the whole matter over to an outside agency like the Dallas District Attorney or the Texas Rangers?

The City's own report doesn't address those issues regarding the legitimacy of the investigation itself. Instead, the investigation was very narrowly focused on one employee's own situation and on the legal definition of a "ticket quota system." As for Officer Walker, she declined to participate in the investigation. I'll have more to say on that in another post. As for the legal definition, in Texas it's defined as "a plan to evaluate, promote, compensate, or discipline... a peace officer according to the officer's issuance of a predetermined or specified number of any type or combination of types of traffic citations." The not-guilty verdict hangs on subtle differences between evaluating based on a "predetermined or specified number" and evaluating based on an "average," an average that is recalculated regularly. The investigator himself said, the system used in Richardson "wasn't bean counting; it was number counting." But I'm getting ahead of myself.

Before the report, here are questions that I wanted to see answered:

So we didn't learn that the investigation revealed that the Richardson Police were operating an illegal ticket quota system. In another post, I'll have more to say about all the things we did learn. Stay tuned.

I don't know who is more naive in this scenario. The public for thinking our city would actually do a real investigation on itself after Palisades, or the city for thinking we would buy this load of horse manure. Clearly, we need an independent investigation. At this point, I'd say it needs to be much broader.

Mark, this is a GREAT read! I’m glad you’re saying everything that we want to. Thank you!!!