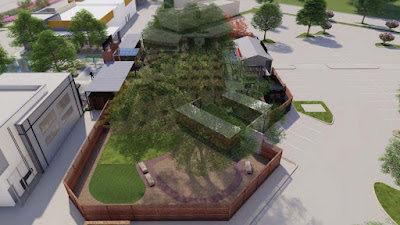 Richardson is getting two more drive-through restaurants, this time not on the east side, where a Salad And Go was recently approved, but on the west side. If the City Council approves, they'll go in Richardson Restaurant Park, the catalyst project for the redevelopment of the West Spring Valley Corridor, a planned development sold to the residents with slides of fancy mixed-use buildings and sidewalk cafes. But the developer says that restaurants with drive throughs saw increased business during the COVID-19 pandemic and he predicts that isn't ever going away. I guess cities built in walkable form are now just going to shrivel and die. At least the City Plan Commission bought the sales pitch. We'll see what the City Council says when the project goes there.

I have to hand it to the developer. He was clever. He had a surprise in store for the CPC. He was pitching Dave's Hot Chicken but he had his audience salivating over a biergarten, which is what is shown in the artist rendering above. It's located behind the row of restaurants, with an entrance through the existing plaza next to the Dog Haus. There's a back gate, too, from the parking lot, with a sign "Locals Only".

When I first saw the biergarten, I thought to myself, what's the restaurant? Then I looked more closely and thought, where's the restaurant? Then when I realized there is no restaurant, I thought how about food? When the developer said, "Right now, we haven't quite honestly figured out exactly where all the food's gonna come from to serve in the park", that's when I suspected the biergarten was mainly for show.

I began to wonder what zoning case was being heard. Does it include the biergarten or just Dave's Hot Chicken? If just Dave's, why let the developer distract us with the pretty pictures of a biergarten? Actually well before this, I got a little conspiracy-minded and wondered if the earlier proposal for Dave's Hot Chicken that was rejected by the City Council, the proposal with two drive-through lanes, was only a negotiating point. If the city approves two drive-through lanes, great, but if they don't, the developer could come back with a single drive-through lane to show how he's compromising and meeting the city half-way. Zoning says 0. Ask for 2. Compromise on 1. Throw in a biergarten that might never get built or will only open for a few hours on weekends and special events. City says yes and everyone goes away happy.

My conclusion? The City got snookered...again. Maybe someday I will be able to drown my sorrows in the biergarten.

As for the second drive-through, it's for Eiland Coffee. The drive-through wasn't the only major modification needing to be approved in that application. It needs approval for a parking lot across James Drive. Neither the CPC members nor City staff could remember another zoning case where a land parcel was split by a street. Moreover, besides parking in the back lot, Eiland will have a coffee roaster there, which qualifies as an industrial use. No one could remember approving an industrial use in an area so close to restaurants and residential.

It's a new day in Richardson. Same as the old day. 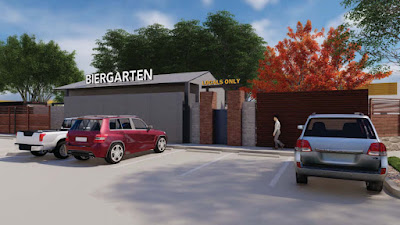 Update: The more I think about the design of that biergarten, the more disappointed I am with how it neglects its neighbors. The artist rendering above is the rear of the biergarten. The "Locals Only" sign is supposedly above an entrance for pedestrians from the neighborhood. If I drive to the biergarten and park in the rear, what am I to make of that sign? Is it for me? Entrances should be obvious by design. This one fails that. Park a couple of big-ass pickup trucks in front of it and you'll need an entrance sign to ever find it. It looks more like the back door that employees use to take the trash out. (Where does the trash go anyway? None of the drawings show dumpsters.) Why not have a real entrance on that side of the biergarten and put a wide, tree-lined sidewalk (Christmas trees, maybe?) from that entrance back to the corner of Floyd and James? That would say something more to the neighborhood than "A 'Locals Only' sign is all we can spare to integrate our biergarten with your neighborhood." Or maybe even move the biergarten to that corner of the property so the neighbors won't have to walk across the parking lot at all. But, again, I have to hand it to the developer. He's got us talking biergarten and ignoring the fact that he slipped a 1980s-style, suburban, drive-through restaurant into a development that was intended to be something for the 21st century.

P.S. The title of this post "Selling Richardson a Biergarten" is all wrong. Of course, what the developer is really selling is a drive-through restaurant. The biergarten is the sweetener.