4th (and best) Dispatch from the Chamber of Secrets 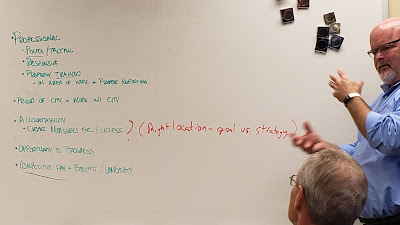 The Richardson City Council has been meeting in secret to set the council's vision, mission, goals, strategies, and tactics for its two-year term. In my three previous dispatches, I barely scratched the surface of the substance of those talks (so blame me for being verbose). This time, I'll finally talk substance. (Maybe just a little anyway. The talks are ongoing.)

Note that this goal-setting is a work in progress. Nothing is done. Even first drafts aren't all done. I don't intend to quote from the rough drafts in progress. But I can see which way the car is headed, so I can say a few things about that in hopes of influencing its direction just a little.

My first disappointment was the word that was missing in the early drafts of the mission and goals. That missing word is "neighborhoods." It is also missing from the 2019-2021 "Vision, Goals, and Strategies". There's still time to correct that oversight, Council members. You're welcome.

But maybe we should back up. This whole exercise seems to be a case of putting the cart before the horse. Another cliche might be even more on point: how about putting one's money where one's mouth is? You'd think that before you agree to spend money, you should know what your priorities are. Put another way, you'd think that before you set a budget, you should agree on what your goals are. But this very same City Council just approved the 2021-2022 City budget. Before they've set goals for the City. That tells me that either the budget process or the goal-setting process is flawed. I suspect the budget process is real. That's already done. The money is committed. So it's the goal-setting process that might be mainly kabuki theater.

In any case, we're doing things in this particular order. Maybe it really doesn't matter in the end. Maybe we'll end up with essentially the same goals and strategies as last year, whether we just review them and tweak them, or whether we start over from scratch. For the record, the existing goals from the 2019-2021 Council are:

The facilitator decided that these goals weren't balanced. He said the Council was missing a goal, one directed specifically at City employees. He seemed to want the Council to replace the first goal, which he considered to be a Culture Goal. He suggested that it be rolled into the third goal, one he labeled a Customer Goal. So, out with the Culture Goal, in with a new Employee Goal. He kept the other two goals, now labeled Process Goal and Financial Goal. That's where the meeting ended. I don't know how this will turn out after a third meeting, but none of the council members seemed to have any problem with where the facilitator was guiding them.

There are seven council members. There is bound to be some tension in their attitudes towards the benefits of, even the need for change and continuous improvement. That tension on the Richardson City Council is captured by these quotes:

Bob Dubey: "You got to be careful you don't change just to change, just so we could say on this little chart that we changed."

Paul Voelker: "I tell all the electrical engineers that there's no steady state. The reality is, if you do try to maintain, just as is, you will fall flat. We need to figure out what that [desired] future state looks like. You will find some change has to happen."

Arefin Shamsul: "As a small business owner, we have to write RFQs. So we write something and we get the job. So next year, we do the same thing, we're still top five, we did not make any big changes. It's all working fine. I'm not going down, I'm staying there because I'm comfortable. Other people are moving up, they're making gains, advancing more. So when I was too comfortable to realize that somebody else woke up, and we're not top five anymore, we have like six. And then we have to wake up. That's why change is important."

The facilitator explained a fundamental stumbling block with all such exercises. It's one that I think we failed at time and again 40 years ago at TI. The facilitator said, "The goal is to further define your vision, right? And this gets kind of clunky when we start talking about this, because separating vision from goals and goals from strategies and challenges and tactics can be difficult."

So far, I understand and agree that this is difficult. But where I do have a problem is where specific, concrete ideas get set aside because they are deemed to be "tactics". Too often, anything specific, measurable, achievable, realistic, and time-based (you know, S.M.A.R.T.) is considered to be a tactic and unsuitable for inclusion in a set of goals. Filter too finely and you end up with platitudes, not goals. When you have platitudes, they can carry over from one term to the next practically unchanged. That's where Richardson has been stuck for years. Again, this year's Council is still in the middle of its exercise, but I think I see which way the wind is blowing.

Next meeting, the facilitator suggests they work on strategies to support their goals: four or five strategies for each of their four goals. Last council ended up with 11 strategies in total. My guess is they'll decide those strategies are still good and will just carry them over (repeating the flaws of goal-setting; see above).

But just in case the council members really want to roll up their sleeves and deliberate some real plans, I offer what I offered in June when the new City Council was sworn in: "Goals for our New City Council". In bullet form:

Do these and we would no longer be rejecting student housing projects near UT-Dallas and the Silver Line DART station simply because they don't conform with the outdated 2009 Comprehensive Plan. We wouldn't have developers avoid even thinking about asking to build duplexes or fourplexes or accessory dwelling units because that use doesn't conform with outdated zoning ordinances. And we wouldn't be throwing money at developments like Palisades that residents don't even support.

I can think of a few more goals that I would lobby for:

I'm sure each council member can add to this list as well. I encourage them to do just that. Even if you get outvoted, the deliberation is beneficial. This could be the only chance you'll get in your two year term to ask for something as basic as deliberating some of these goals. Now is the time. This is what you ran for office for. Don't drop the ball. Push for smart goals that we can all be proud of.

That's it for dispatches from this one secret City Council meeting. I wouldn't have had to take up so much of your time if the City Council had only video recorded the meeting so you could watch it yourself. Maybe next term.