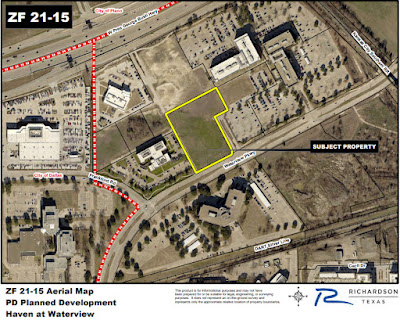 When we last looked at that land north of UT-Dallas, I was ready to blame UT-Dallas for killing a proposal for more student housing. Last night, at the Richardson City Plan Commission meeting, UT-Dallas managed to keep their fingerprints off the body. So we have to take a closer look at other suspects. Hanlon's razor says, "Never ascribe to malice that which is adequately explained by incompetence."

The Richardson City Plan Commission Tuesday evening failed to recommend approval for the development of a private apartment tower for student housing adjacent to UT-Dallas. The vote was 3-3. A majority was needed to approve recommending the project to the City Council. So, technically, the application wasn't rejected. It just wasn't approved. So the CPC moved to have a continuance until September 21, when hopefully the CPC can reach a majority decision. Or not. We'll see.

I thought the "no" votes were misguided. Here's why.

Obviously, three of the CPC commissioners thought otherwise. What was their logic? That's harder to say.

One offered no reason at all. Just no.

One raised two concerns. The proposal (which is aimed at college students) doesn't have a children's playground. Also, the proposal didn't mention accessibility for students with disabilities (someone replied that's not something the CPC needs to ensure; that federal law requires that).

The third commissioner said he thought TOD is better situated south of Waterview Parkway. He was concerned with pedestrian access, which isn't there today. He was concerned that UT-Dallas wasn't there in support of the project. (They weren't there in opposition, either. In fact, the CPC received nineteen letters in support, only four opposed, and the applicant submitted a petition with hundreds of signatures in support). Finally, this commissioner pointed to the City Council's rejection of a similar application by the same applicant last December. "We ought to be respectful of the Council's decisions and guidance that they've given us." (It's a different project now. It's a different council now.) That Council guidance, in his mind, was that the 2009 Comprehensive Plan indicates this property is not intended for residential uses. (That's a 12 year old plan. It's sorely in need of an update, which City Council members have admitted in recent meetings.)

The giveaway that the outcome was pre-determined came when the chairman asked all three commissioners who voted no whether there was anything that could be changed about the application that could persuade them to change their votes. No. No. No.

I feel sorry for the landowner. He owns a piece of property that is ideally situated near a growing university and a light-rail station, but the City Plan Commission says an obsolete land use plan prohibits him from using it for residential purposes. He'd be crazy to build yet another office building to go along with the vacant buildings nearby. So he's stuck. And the City of Richardson is unwilling to work with him. The City Plan Commission had literally nothing to offer as a way forward.

I am disappointed specifically with the City Plan Commission. Watching their "deliberations," if I can use that word for their lack of substantive deliberation, gave me no confidence in them. I left the chambers with the depressing feeling that, with a few exceptions, a random collection of Nextdoor commenters might have yielded a more productive discussion.

Only six of the nine commisioners were present Wednesday evening. Come back September 21 when the case will be continued. Maybe the full body might yield a better deliberation and a result more in keeping with Richardson's future needs and stated vision of favoring transit-oriented development (TOD).

at 10:30 AM
Email ThisBlogThis!Share to TwitterShare to FacebookShare to Pinterest
Labels: LocalPolitics

My name is Marcia Grau. I found the most telling comment was the commissioner who said that their intent was not to determine the best land use but to decide whether the request was appropriate based on the 2009 Master Plan. that says they have no interest in determining what is best for the our community, just on following an outmoded Mater Plan. Per a previous comment by the City Manager, there is no intent to update the Master Plan although the Mayor requested a review. If I remember correctly, he said something along the lines of - the Master Plan has been altered to accommodate builds like City Line so it is an evolving document that doesn't need to be reviewed and updated. So is it flexible to support City Line and inflexible when other developers want to do something good for us?

Marcia Grau, thanks for the feedback. My memory of what the City Manager said at a different meeting, one I watched, was that the City has adopted several planned developments over the years (e.g., Spring Valley Corridor, City Line, Palisades, Downtown Richardson). He saw all of these as amendments to the Comprehensive Plan. He suggested that maybe all that was needed with the Comprehensive Plan was to roll those PDs into it and call the Plan updated. Not my idea of a review and update, but I don't recall any City Council member suggesting that wouldn't be sufficient.

What are the options for changing this outcome? We don't vote for the city planning commission, so how do we as citizens influence this situation? Do we need to bring it to a city council meeting?

Yes, the comments against were mostly irrelevant. There seemed to be confusion about what land use means. That was the only question they were supposed to address. Instead, they were asking social inclusivity questions and concerned about how UTD might feel about it.

In the planning and development community, it's fairly well established that a quarter-mile is the minimum walkshed around a rail station for a TOD. A half-mile is often used too. Part of the parcel is within the quarter-mile radius and probably should have been designated TOD on the Future Land Use Map in the comprehensive plan.

The question they were supposed to vote on was whether this is technically an acceptable land use. Instead, it felt politically driven.

Louis Burns, thanks for the feedback. Your own testimony during the public hearing was the best five minutes of the meeting. You say the CPC should have focused on whether this application is an acceptable land use. In your opinion, it is. Sam Chavez (city staff member, not a CPC commissioner) injected his own opinion into the meeting when he tried to direct the CPC on the proper way to judge that: whether the application conforms to the future land use map in the 2009 Comprehensive Plan. I thought his opinion was presumptuous, both as a matter of fact and as to whether it was even appropriate for a city staff member to interrupt deliberations to inject his opinions into CPC deliberations. I thought he should have offered his opinions during the public hearing part of the meeting, like you did.

Marcia Grau again. @Mark Steger - do you remember at which Council meeting the updating of the Master Plan was discussed? I would like to watch it and then show up at the next Council meeting to ask them why it is can be altered to suit some developers but not when other developers request a change. The statement made by the commissioner that best use of the land is not a factor in the decision seemed very odd to me. As did the idea that members of the CPC will not pass any project without knowing in advance the Council will approve it. Thanks.

@Marcia, the CPC is only supposed to give a technical opinion on whether a use is acceptable based on zoning considerations. An acceptable use may not be the best use. "Best use" in real estate usually means the most profitable use within the context of the surrounding area.

Marcia Grau, the council meeting I remember was the first budget work session meeting. You can watch it here, https://richardsontx.swagit.com/play/07262021-718, starting at about the 55:00 minute mark of Item B, when the mayor asks the City Manager his opinion on updating the city's Comprehensive Plan. The City Manager finessed the question away, saying they'd study that, and then claiming that all the planned developments the City has done was effectively an update of the Comprehensive Plan. He suggested maybe the City could create a "compendium or gathering" of all that work. I consider much more is needed than just that. Read my "Goals for our New City Council".

We will be there this coming Tuesday at 7 pm ....that is the SEP 21st meeting. Please come and make your opinion known. You can also ask Chris at the city to email your opinion to the CPC and the Council. The sooner they forward the letter the more chance of them reading it. .chris.shacklett@cor.gov

also I have a petition on line..https://form.typeform.com/to/wFYCk2pq