Yet Another Drive-Thru in East Richardson 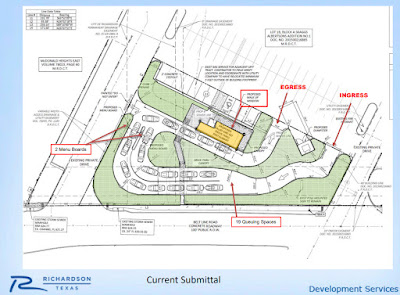 For those who want more eating options on the corner of Belt Line and Plano Rd, good news. The Richardson City Council approved the construction of a "Salad And Go." For those who don't care about sit-down dining, even greater news. The Council approved a form for the restaurant that allows for only drive-through service, with *two* menu boards and no parking. On the other hand...there's always another hand, isn't there?

Council member Joe Corcoran, before voting against this project, said by his count there are already 11 drive-through restaurants near this corner, and will be 14 by the time all the planned projects are completed.

He understands something Mayor Pro Tem Janet DePuy does not. Before she voted in favor, she said we can always raze a building if it doesn't work out. She didn't say who the "we" is that she's talking about. She also didn't say "work out" for whom? The landowner or the City as a whole? It's possible this development will "pencil out" for a quick payday for the landowner now, while leaving a burden for whoever picks it up when the current landowner moves on. And City taxpayers end up holding the bag for the infrastructure costs of unsustainable development, which this project could be a poster child for.

The City won't own the building. And even though single buildings do get razed now and then (by the landowner, not the City), the form a neighborhood takes is more persistent and harder to change. As Joe Corcoran's count implies, the form this neighborhood of Richardson is taking is of a sea of pad-site, fast-food restaurants with drive-throughs. Adding yet another one, one without any sit-down option at all, just cements this form into place a little more firmly. Every such approval from the City Council makes it that much more likely the next drive-through will be approved as well and less likely we'll ever get walkable, sustainable development.

The lack of a sit-down option makes me wonder if the real threat here to urban development is not from the addition of drive-through lanes to sit-down restaurants, but the elimination of the sit-down options. Is that the new end game we're threatened with?

The mayor, in his remarks before approving yet another drive-through restaurant, waxed eloquent about landowners' rights to maximize the value of their land. It made me think of that vacant land north or UT-Dallas, the land zoned for employment, the land next to a string of vacant office buildings, the land the owner wants to maximize the value of by providing a service he's confident the market will support—student housing near a growing university and near an upcoming DART station. I await the mayor's support for that landowner when he comes before the council (again) to get council approval for his project to increase the value of his land (the mayor rejected him once before).

The vote for another drive-through restaurant was 4-3. The three "no" votes were all from newly elected council members. It all makes me think the citizens of Richardson need to seat a fourth new council member next year.

at 10:00 AM
Email ThisBlogThis!Share to TwitterShare to FacebookShare to Pinterest
Labels: LocalPolitics