What Would It Take to Not Get Promoted at RPD? 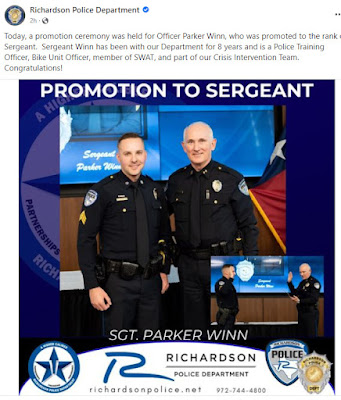 The Richardson Police Department heralded a promotion in the ranks for new Sgt. Parker Winn. He is described as being a Police Training Officer, member of SWAT, and part of the RPD Crisis Intervention Team. If the name Parker Winn doesn't sound familiar to you, maybe the name Neco Bonham will.

And if the name Neco Bonham doesn't strike a bell, maybe this photo of Officer Parker Winn making a traffic stop of Neco Bonham will. 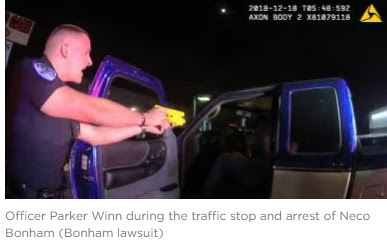 Is your mind still coming up blank? Then let's go to the archives. The Dallas Morning News had the story back in 2021.

It seemed like a routine traffic stop, so Neco Bonham asked the officer why he wanted him out of the pickup truck.

Instead of an answer, the 18-year-old received an electric jolt from a Taser, punches to the head and handcuffs during the December 2018 incident, court records show.

It took the Richardson police officer about 15 seconds to escalate the encounter into a violent use of force, said Bonham’s lawyer.

The Wheel covered the story, too ("Chief Spivey Should Go"). All I can add now is to emphasize:

Today, in 2023, that same Officer Parker Winn is a Police Training Officer and part of the RPD's Crisis Intervention Team. Really? Is he typical of RPD's officers in those roles? And now he's a sergeant. Really?

"A man dies when he refuses to take a stand for that which is true."
— Martin Luther King, Jr.