Candidates for CoR and RISD 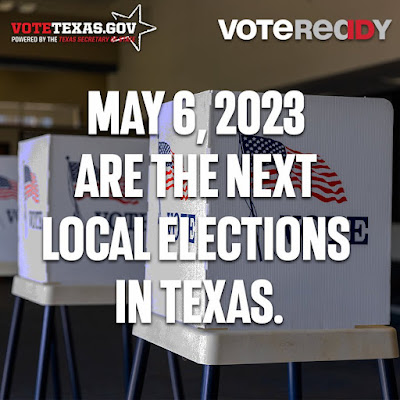 As of early January 20, 2023, here's the state of play for the elections for City of Richardson City Council and Richardson ISD Board of Trustees. The last day to file for a place on the ballot is February 17.

at 5:00 AM
Email ThisBlogThis!Share to TwitterShare to FacebookShare to Pinterest
Labels: LocalPolitics, RISD

Dan Barrios requested a candidate information packet. He ran for Place 3 in 2019, losing a ruoff to current Mayor Pro Tem Janet DePuy by just 82 votes. No one has yet officially filed to run in Place 3.

Stephen Springs has reported filed for a place on the ballot in Place 3. Once his application is approved, he'll be the first candidate on the ballot for Place 3.

Dan Barrios is reported to be planning to file for a place on the ballot in Place 3. Once their applications are approved, there will be two candidates for Place 3 (Stephen Springs and Dan Barrios).