Update on That Land North of UTD

Consider me a booster of UTD. I've long thought Richardson ought to foster UTD's growth and involvement in the City's own future development. Here is a post from 2011 where I compared the potential in Richardson with what I saw as a similar situation in Beijing, of all places: "The Future of Richardson is in Beijing". Recently, I was pleased to see the announcement of UTD's planned research centers in Richardson's "Innovation Quarter." It's a step in the right direction.

But I draw the line when UTD uses its large influence with the City to stifle its neighboring property owners, preventing them from using their own property in ways that I think would benefit UTD students and benefit the nearby neighborhoods that students are spilling over into looking for housing.

Let's review a City Council decision that I puzzled over in December. The City Council rejected a proposal by the owner of vacant land north of UTD to build a multi-family apartment complex specifically targeted for students (it would have many small, one-bedroom, affordable units). Why was it rejected? That's what I puzzled over. It's nearby a growing university. It's nearby a planned DART station for the Silver Line. It seems like a good example of transit-oriented development that we ought to welcome, not shut out.

But UTD doesn't want it. City staff all but sided with UTD in preparing a staff report for the City Council. As I said then, "City staff helpfully included a slide labeled: 'Considerations.' Included were six bullet points council members could choose from if they were at a loss to defend a no vote." I didn't find any of the "considerations" persuasive. I suggested there was an unspoken seventh "consideration": Calvin Jamison, UT Dallas' vice president for facilities and economic development, wrote in opposition. I inferred that the reason was because "the new apartments would compete with UT-Dallas's own apartment business."

Since then, I've found a document that suggests maybe an even stronger motivation for UTD's opposition: UTD has set its eyes on acquiring this same property. Have a look at UTD's own Master Land Use Plan from 2018. 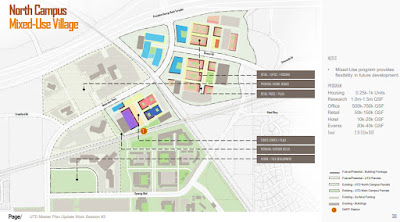 A Mixed-Use Village is only one of three slides UTD includes in its Master Plan for North Campus. The others show possibilities of an Entertainment District or a Research Center. In all three, UTD shows that far northwest segment containing the vacant land in question and labels it "Potential Future Acquisition." I'm not surprised UTD would object to a landowner wanting to build something on land that UTD has its own eyes set on. Keeping the land vacant would preserve more options for UTD and keep the price down as well. Note that this is conjecture on my part, but prove me wrong.

I hope the landowner makes another attempt to get City Council approval. There's been some turnover on council. Maybe the new body will still support UTD as much as a great institution deserves, but also recognize UTD's obvious conflict of interest in the matter and not let that institution's business interests trump those of its neighbors.

At the City Council's Budget Workshop July 26, City Manager Dan Johnson said "It is time to update the Parks Master Plan...Every ten years we're required to do that..." (starting at 51:40 in Item B).

Louis Burns comprehensive report of the CPC meeting can be read here: "Rezoning for Student Housing near UT Dallas".