Get On Board...If They'll Have You 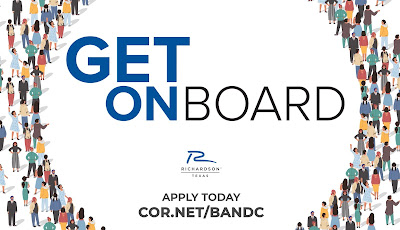 The Richardson City Council is holding a come-and-go event for persons interested in serving on a City board or commission. Go. Apply. I can't say you'll be accepted but I've never seen even this small attempt at outreach by the City before.

The Richardson City Council will be on hand Tuesday, Sept. 20, to meet with residents interested in serving on a board or commission. In addition, City staff liaisons for each board or commission will have separate information tables setup to answer questions about board service. Applicants will have the opportunity to apply during this come-and-go event.

I've long wanted the City to be more aggressive and open in recruiting persons for boards and commissions that would make those bodies look more like our City. As it is, the system has the look-and-feel of a good-old boys club. One tell is in the application, which asks, "Are you a graduate of/currently enrolled in the Leadership Richardson program?" It doesn't say or imply that a "yes" answer is required for acceptance, but if it isn't important, why ask? The fact that the Leadership Richardson (LR) program has a $1,500 fee suggests a pay-to-play system in which the LR graduates will not look like the average person who lives in our City. To the extent that this affects the makeup of the City's boards and commissions, they won't reflect the diversity (diversity of ethnicity, religion, age, wealth, thought, what-have-you) of Richardson, either.

But inadequate diversity is only one failing of Richardson's boards and commissions. Maybe worse, we seem to lack professional inclusion in our boards and commissions. That's most telling on the all important City Plan Commission (CPC), whose makeup seems to be woefully lacking in members with much education or background in actual city planning and land use. Attend a City Plan Commission meeting and listen; listen to the members of the public who come to support or oppose a project, and listen to members of the CPC who then vote on the applications. See if you can tell any difference in the general insight and critical thinking between what's said by the public and what's said by CPC members. The City badly needs more experience on the CPC, not experience in LR, but experience in city planning.

The current system of filling openings needs more change than just adding an event for members of the public to attend and fill out an application. The City needs much more outreach than that.

Another failing of the process is that the final decision on appointment to boards and commissions is made by the City Council itself. I described Richardson's process as being similar to the system in Dallas as described by Jim Schutze in his book "The Accommodation".

Respect the order, pay your dues. Go through "Leadership Richardson," which is a product of another establishment power center, the Richardson Chamber of Commerce. Go through "Citizen Police Academy." Put in your time on boards and commissions. Note that every step of the way is controlled by the establishment. Even getting appointed to a board or commission in the first place is controlled by the City Council. But if you show the right amount of respect long enough, if you manage to assemble the right resume, just maybe you, too, will get the nod that's necessary for election to City Council.
Source: The Wheel.

It's the Richardson Way. Change is needed. Something needs to happen. The upcoming event is good, but far too little to exert the kind of change that's needed. Jim Schutze's book "The Accommodation", reviewed by The Wheel, is the current selection of Big D Reads.
at 6:00 AM
Email ThisBlogThis!Share to TwitterShare to FacebookShare to Pinterest
Labels: LocalPolitics

Mark, there was a crucial point missing in your assertion about the cost of Leadership Richardson being a barrier to participating in City Boards and Commissions, and that is that the Chamber Foundation provides financial assistance to those wanting to join LR and needing support with tuition. As a graduate of Leadership Richardson, I believe there is value in bringing a certain level of knowledge about our City to working on Boards and Commissions. There is also merit in your view that having a more open system brings a needed diversity of perspective to governance. Those two perspectives don’t need to be in opposition to each other.

Grtiff, thanks for the additional information.