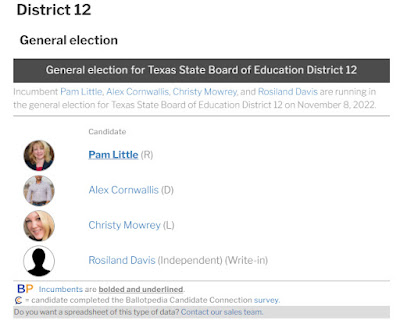 It looks like the Texas State Board of Education (SBOE) is going to kick the can down the road, deciding to wait until next term to rewrite the Texas social studies curriculum (what we know as the TEKS). Why? It appears that the SBOE caved to pressure from right-wing Republican lawmakers who objected to the standards coming out of the curriculum committee. When the SBOE decided to delay, Republican lawmakers celebrated on Twitter, "The board voted to scrap the wokeified proposed changes to the TEKS." The likely explanation for delay is that right-wing Republicans hope that they can increase their majority on the SBOE next term and get proposals more in line with their politics.

SBOE District 12 member Pam Little (Republican representing Collin County, including Richardson) tried to put a better spin on it. "I just don’t think we can get it done in 2022," Little said. Sure they can, if they had some backbone. It's not like the SBOE didn't have this task on their calendar for the last ten years. That's how often they revise the curriculum. For an SBOE member to 'fess up to not doing their homework is a telling sign that the real reason is much worse. Either they can't stand up to political pressure or they don't want to. For all I know Pam Little was one of the SBOE members applying the pressure.

Pam Little and the entire SBOE is up for election this November. Voters can replace her. Voters should replace her, always keeping in mind to be careful what you wish for, in case you get it. In 2012 the SBOE was truly scary. One scary character involved then was Richardson's own Bill Ames, the gadfly who frequently speaks during the public input sessions at Richardson ISD board meetings. He was appointed to a curriculum committee by a scary member of the SBOE, Don Mcleroy. The Texas Tribune published a good summary of the situation facing Texas in 2010, titled "Hijacking History". Bill Ames is featured prominently. No more of that, please.

at 6:00 AM
Email ThisBlogThis!Share to TwitterShare to FacebookShare to Pinterest
Labels: RISD, StatePolitics