Parallels to Richardson in "The Accommodation" 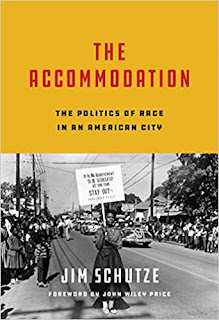 "The Accommodation," Jim Schutze's classic 1986 history of race relations in Dallas, was reviewed here yesterday. Richardson is only mentioned a few times in the book, peripherally. Still, several paragraphs from the book reminded me of Richardson.

Schutze describes the role of the "Dallas Citizens Council," a private group of CEOs, bankers, oilmen, and other civic leaders who had their hands on the levers of power in the City of Dallas.

The dual implements of a weak city council and a strong city manager left precisely the amount of gap in the power structure that the business oligarchy needed to really run things, mainly through the offices of the Citizens Council, which had transformed itself from fundraising body to shadow government. The city council was elected at large, which meant that the only people who would ever occupy its chambers were members of the slate ordained by the Citizens Council. The officially and frequently pronounced rationale of this system was that it would allow a few good men to think and plan for Dallas in terms of "what was good for Dallas as a whole."
Source: The Accommodation.

The City of Richardson also has a "weak-mayor" system of government, where the unelected City Manager wields executive power. In Richardson, the only check on the City Manager is provided by a weak City Council elected at large. Historically in Richardson as in Dallas, "the only people who would ever occupy its chambers were members of the slate ordained" by the establishment. In Richardson, that's the Richardson Coalition PAC, a political action committee that has won every race but one since it became active in 2009. The supposed benefit of the system is that it results in what is claimed to be good for Richardson as a whole. Here it's called the "Richardson Way."

What does it take to get a candidate for Richardson City Council to get an endorsement from the establishment? Another paragraph in "The Accommodation" explaining how it was done in Dallas reminded me of Richardson.

That was just how it was in Dallas, how it always had been. That was especially how it was with [Dallas Mayor] Mr. Erik Jonsson. Dallas was an ordered city. Everything had its order and the order needed to be respected. Even the white people only got ahead by respecting the order, by working their ways up slowly through the labyrinth of committees and commissions, charities and volunteer activities until the men at the top finally smiled upon them.
Source: The Accommodation.

Respect the order, pay your dues. Go through "Leadership Richardson," which is a product of another establishment power center, the Richardson Chamber of Commerce. Go through "Citizen Police Academy." Put in your time on boards and commissions. Note that every step of the way is controlled by the establishment. Even getting appointed to a board or commission in the first place is controlled by the City Council. But if you show the right amount of respect long enough, if you manage to assemble the right resume, just maybe you, too, will get the nod that's necessary for election to City Council.

In Dallas, the Black community showed how to break the stranglehold on local politics held by the white oligarchy. This is where the Dallas story diverges from the Richardson story.

Out of the Fair Park homeowner movement came the first Black leaders in Dallas who seized power without permission from the white community, who understood that power had to be seized, and could never be received as a gift or token. The Fair Park homeowners became the plaintiffs in the federal suit that finally brought down the old at-large election system, depriving the oligarchy of its principal mechanism of political control.
Source: The Accommodation.

The federal lawsuit broke up the "good ol' boy" system in Dallas and replaced it with a single-member district electoral system. That in turn led to the election of Elsie Faye Heggins to the Dallas City Council, the first African-American woman to serve in that role. In her honor, a portion of a street in South Dallas has been renamed after her.

This paragraph in "The Accommodation" about Heggins's service on the Dallas City Council made me think of Richardson. It made me think how we need an Elsie Faye Heggins here, too.

When she talked back to new mayor Robert Folsom, she did so with eyes cast down and voice raised and just barely trembling. But she talked back. She told the mayor and the white members of the council that they were racists. She didn’t laugh when they laughed. She didn’t want them to like her. She didn’t like them. When Mrs. Heggins was giving him the business, the body language of Mayor Folsom was worth a million words. Accustomed to Black people who spoke in answers, not questions, and never ever in accusations, the former SMU footballer and millionaire apartment developer took even the most timorously expressed opposition from Mrs. Heggins as if it were a savage body blow. Most but not all of the time, Folsom managed to not shout and waggle a parental finger at Mrs. Heggins. But he seemed to suffer excruciating physical pain whenever she spoke to him, twisting and writhing in his seat, holding his head and grimacing. At every Wednesday council meeting, Heggins and Folsom reenacted this danse macabre again for the television cameras, and every Wednesday evening on the six o’clock news it played to raves in the Black community, each of the mayor’s grimaces earning Mrs. Heggins another heartfelt wave of uncritical devotion from her followers.
Source: The Accommodation.

The "parallels" I draw here between Dallas and Richardson aren't perfect. Some aren't even parallels. They are contrasts. For example, Richardson doesn't have an Elsie Faye Heggins. Instead, we keep electing candidates who buy into the go-along-to-get-along role of the City Council. We risk going the way of Dallas in the 1950s and 1960s. "The Accommodation" describes that as "a well-run, pre-democratic city-state, ruled by a board of elders who valued wealth and ritual over truth and law."