TIL: Why Sea Level Rise is not the Same Everywhere 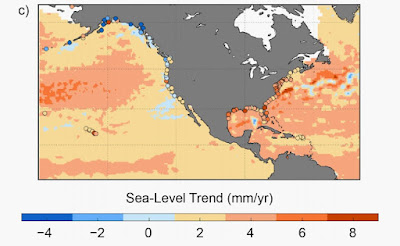 That was years ago, but that "proof" always bothered me more than it ever seemed to bother climatologists. This month, Wired magazine published an article that answers the question that's bothered me all these years. What gives? Read on.

Between now and the year 2100, coastlines may average an extra 2 feet of rise, thanks to emissions already in the atmosphere, and up to 5 feet more if humanity fails to cut its emissions between now and then. Emphasis on average. The reality is that different stretches of the coasts will see wildly different rates of oceanic creep. By 2050, the average rise will be 4 to 8 inches along the Pacific, 10 to 14 inches along the Atlantic, and 14 to 18 inches along the Gulf. So what gives? If melting glaciers are loading all the oceans with extra water, shouldn’t all the coasts experience sea level rise equally?
Source: Wired.

That map above is color coded by how much the sea level is changing on different coasts. Alaska is blue because the land is rising and has been for thousands of years as glaciers melt and their weight leaves the land. The US Gulf coast is red because the land is sinking, some of it because humans are extracting water and oil. Even with the same sea level rise everywhere, "relative" sea level rise will be different.

In Galveston in particular, the land has been collapsing at an astonishing rate. “The numbers I'm going to give you are going to be hard to believe, but there's an area in Baytown, where there's a big Exxon Mobil industrial plant, that sank about 11 feet in a period of 50 or 60 years, because they were just unsustainably pulling water out of there,” says Bob Stokes, president of the Galveston Bay Foundation, a conservation nonprofit...“There was a nice upper-middle-class subdivision where all the Exxon executives lived that ultimately had to be condemned, because water was lapping up the foundations of these houses.” (Whether or not the irony was lost on them isn’t clear.)
Source: Wired.

So, thank you Wired for answering a question I've had for a very long time.