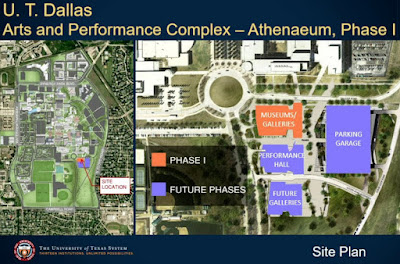 UT-Dallas in Richardson (my new name for our university) announced that groundbreaking on the Crow Museum of Asian Art will happen in about a month.

In case you don't follow museum news, the Crow Museum of Asian Art is a fixture in the downtown Dallas Art District. But the building there is too small to properly display its huge and growing collection. In 2019, it was announced that the University of Texas at Dallas would acquire the Museum and establish a second Crow Museum location on the UT-Dallas campus. After a three year fundraising program, construction on the museum is now ready to begin.

This will be a huge asset not just to UT-Dallas but to the City of Richardson as well. My only reservation about this news is the location, on the UT-Dallas campus itself. What will it take to integrate the museum with the surrounding city? Without that integration, the new museum will be featured in "hidden gems of Richardson" articles for years. That's not a compliment. That would not do justice to the collection. This could be a catalyst project for the City of Richardson. UT-Dallas is dropping the opportunity right in the city's lap. The city should exploit it. But is it even on the City's radar? Not that I can see. The City's own comprehensive plan for this area of Richardson has not been updated since 2009.

The Dallas Morning News's architecture critic doesn't like it. "Why UTD’s plan for a $158 million arts center is out of step for the moment".