Dr. Stone in the Superintendent Spotlight 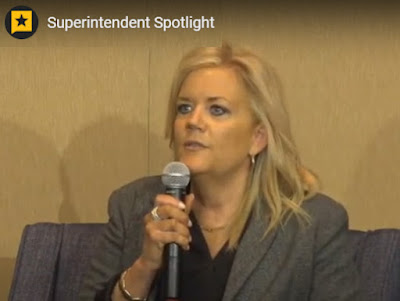 The Texas Tribune hosted a forum, Superintendent Spotlight, that featured three school superintendents from north Texas. They were Michael Hinojosa (Dallas), Kent Scribner (Fort Worth), and Dr. Jeannie Stone, former superintendent of Richardson ISD. The discussion was moderated by The Texas Tribune's Evan Smith. This is the first time that I have seen that Dr. Stone has talked on camera since her departure from the RISD in December, 2021. Read on for Dr. Stone on learning during the pandemic, on mask mandates, on critical race theory, on equity/diversity/inclusion, on book banning, and on why she quit.

This transcript has been lightly edited for clarity.

On the last two years...

Evan Smith: What has it been like, really high level, over the last two years? How difficult has it been?

Dr. Stone: Oh, absolutely. So I've said I tweeted last week that if you're in school, you can't explain what it's been like. If you're not in schools, you really can't understand. I think that really resonated with a lot of people because, if you think about those first days, months after, when everyone else was being able to work from home, teachers were on the frontlines, they were the frontline workers and they've never stopped. We all went back and a lot of people are still working from home. And still don't understand. A lot of businesses and offices have just started having their employees go back to work. Well teachers never ever stopped working and with all of the health risks and all of the, now the learning loss and the impending STAAR tests coming up and all that. It's if when you talk to teachers, they will tell you that people who are not in schools do not understand what it's like.

Evan Smith: Superintendent Hinojosa referred to only about 3% of his kids did well. And there's been kind of a setback in the vast majority, overwhelming majority. Same in your case?

Evan Smith: So large learning loss is a thing. This is a phrase that I don't know that I was aware of really before the pandemic but I felt like I heard it every single day during.

Dr. Stone: I mean it's a thing in every district in every state in the country. Learning loss is real.

Evan Smith: Was it being taught in your schools?

Evan Smith: Was it being taught in your schools?

Dr Stone: Of course not.

Evan Smith: Well, you say of course not, Ms. Stone, but the legislature believed enough that they had to ban something. ... Is this a legitimate debate, do you think?

Dr. Stone: I think it's definitely a legitimate debate. There definitely is something that is critical race theory. It's not taught in schools. And I think that was the narrative that was crafted really last summer, and then it caught on like wildfire. I've never seen anything like it. Equity became a four letter word. And the work that we were doing that was making a huge difference for kids, all of a sudden, a lot of it was called wrong and it was like something I'd never seen before.

Evan Smith: Ms Stone, talk about how [the legislature's ban on teaching critical race theory] played out up in Richardson.

Dr. Stone: Nothing changed in terms of what was being taught. There was a lot that came about because of the narrative around teachers doing things or presumed to do things that might be wrong or not what was in the best interests of students and so the morale of teachers has taken a hit. And so I think that's been a lot of what we all have been trying to reinforce with them.

On who has a right to be part of this conversation...

On banning books in libraries...

Evan Smith: What was your role specifically in this conversation and what's happened in Richardson as it relates to the examination of books in the library?

Dr. Stone: We had an early challenge, even before this became a thing, of a book that was being used that a teacher had chosen this book in a reading book club, and it was on the list that could have been chosen by a student. That was brought forward and there were a lot of things that were brought out in one of our board meetings about the content of that book, that was inappropriate, and we addressed it and took the book off the list and addressed it with the individual teacher. Those kinds of things will happen. Teachers may make bad choices about those kinds of things, and we address them, but to call to challenge or to think in any way that pornography is in our schools is just absurd. If that were the case you would have, you would have stories in every newspaper, you would have stories that were erupting all of the time. What I did, though, when Representative [Matt] Krause's list came out was I actually went to one of my elementary libraries, and I asked the librarian to bring out any of the books that were ...

Evan Smith: You actually used the list as a guide?

Dr. Stone: So we all looked at it and used it and I was just...I was very interested to see what this was about. So I spent a full day in one of our elementary libraries and I had a stack of, there were like eight books, I think that were there. And I read through them and I talked to the librarians about them and they were books that were inclusive of the students who are in our schools. And so for that reason, I was able to to defend them and to stand up for them because there are 10,000 books in the library shelves and there were eight books that had some type of LGBTQ+ character or symbolism or something...I supported the professionals to make those decisions. And these were approved books that are approved by the state.

Dr. Stone: I think they should be in that conversation. But I think it has to be measured with an understanding that they're speaking for their family, for their family values, and not particularly for all of the 39,000 or the 100,000 families and so we have to take that input. We have to take all of the input and then we have to make an executive judgment for what is the best decision for all of the students that we serve and so sometimes that's difficult for parents because they want just what their family wants and so that's when things have become really heated because of disagreements and polarized views.

On the predicament of school boards...

Evan Smith: Do you sympathize with the predicament school board members are in right now. I know that your school board president, I'm not mistaken. She stepped away. A lot of people who've been on school boards have decided that this may not be the way I want to spend my time right now because the heat has been turned up pretty significantly. You sympathize?

Dr. Stone: Oh, yeah, and we need to support and be so grateful for our school board members of our school board. The past school board president from Richardson ISD is here. And you know, they're elected officials, they're just serving their communities but they are taking the heat for it because they are representing a voice in the community but not all voices are the same. With every issue that we've had since the pandemic began, I could almost predict that 50% of the community would feel one way about it and 50% of the community would feel another way about it. And so school boards are caught in the middle of it.

Evan Smith: Ms. Stone, did you feel supported sufficiently through all this by Commissioner Morath and by the state government?

Dr. Stone: Yeah, I mean, I think all of it, I just have to presume that everyone is doing the best that they can do. I think that Commissioner Morath, he's in that position, he cares about the kids of Texas, he cares about school districts, he's doing the best that he can do, but this was unprecedented. I was so tired of saying that word. But, you know, everyone was building a plane as they were flying it, but I think in terms of the support for the pandemic, I think that we had the support that we needed from the commissioner. The challenges that we got, you know, being sued about the mask mandates, that was not helpful. That was very distracting. It helped to polarize the community and to create a lot more chaos in our board meetings. And so, certainly that was not helpful. We were making a decision that was based on local control. We surveyed our parents. 80% of our parents wanted us to have masks. And so we were doing what we felt was in our duty to protect the students that we're serving and the families that we're serving. We were supported by our teachers, but not at the state level.

Evan Smith: Ms. Stone, you're already out of the job. You quit in the middle of the school year. Why? Was it that bad? What happened?

Evan Smith: Under the circumstances you felt like you could not do what was best for the district now. This was about the district or about you personally?

Dr. Stone: It was about both, it really was. There were so many distractions that were in the way of focusing in on what we needed to be focusing in on in our district, that I had to make a decision that I needed to step away.

Evan Smith: And this was, just to be clear, this was your decision?

Evan Smith: If you had wanted to remain, they would have had you remain.

Dr. Stone: It was my decision.

On equity and maybe on her own legacy...

Dr. Stone: You're looking at three districts, I think maybe the only three, or three of only a handful of districts in entire state, who have an equity policy, a very, very strong equity policy that puts words in place with actions behind them. That policy, that's one of the strongest things that a board can do, adopt a policy that will be in place when we leave, and that's what is going to carry on the work.