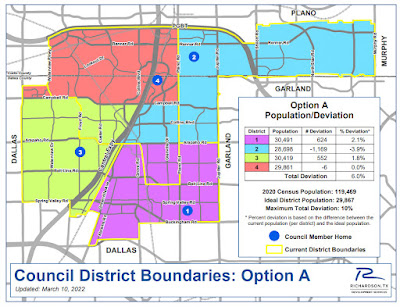 By the way, the two options being presented to the public were drawn up by the City Plan Commission. Oh, it wasn't called the City Plan Commission. It was called the Council District Boundary Commission. Was it just a coincidence that the latter was made up of exactly the members of the former? Hardly. No other option was even considered. The City Council had an opportunity to live up to their adopted goal to "Promote avenues for public engagement and input," including "Evaluate opportunities to promote service of boards and commissions and to broaden the diversity of applicants." They could have recruited members of the public who haven't been picked for all the other boards and commissions. This could have been a good avenue for broadening public engagement and input. Like the headline says, the district boundaries are meaningless. What's the risk in picking some newbies for the commission? It's not like the commission can adopt anything. Adoption is still left to the City Council. But nyah. Those goals were always more PR exercise than promises to live up to. So go ahead. Study the two options like it means anything. Flip a coin. Pick either one.

at 11:00 AM
Email ThisBlogThis!Share to TwitterShare to FacebookShare to Pinterest
Labels: LocalPolitics

It could matter if the changes had an effect on which district any current council member lives in. Hopefully this is just a fairly meaningless exercise to rebalance for population changes though. In the future, I do think we should make it matter and have districts elect their own representatives.

Alastair, you are right that theoretically, certain conceivable boundary changes could affect which district certain council members live in. But the minutes of the commission meeting say, "The Commission may want to avoid placing current Council members in a different district from their current district." So, that wasn't going to happen. They were always going to be even more meaningless than I mentioned in my blog post.